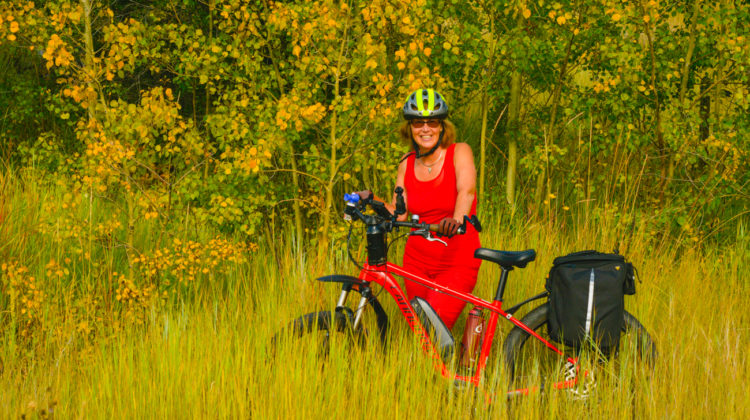 Amy Newman on an overgrown section of the CWR near old Yale Road, north of Mount Begbie. Photo by Richard Wright

After months of hiking and biking, a guide to the history of the Cariboo Waggon Road is now available.

Amy Newman, with the help of Richard Wright, has spent months trekking the trails along the Cariboo Waggon Road, taking notes to assemble a guide for the historic B.C. heritage route. Pathway to Gold: A Guide for Travellers o the Cariboo Waggon Road is now available online. Newman explains the conception of the guide:

“It’s what we wanted to call a living document, in other words, the project is a very long-range project, at this time we have only completed phase one, which means we have located much of the old Cariboo Waggon Road, initial phase one was to do Clinton to 127 Mile. My partner Richard Wright and I got out to find it, ground-truth it, found old maps of the road, Richard suggested to New Pathways to Gold, ‘why don’t we do a guide for it?’ Then we’ve got something to refer to, that in the future, as we go through the project and get trails built and amenities, and all of these things, then it would be a document people could print off and take with them, whether they’re in their cars or cycling or walking or as I like to call it, ‘trekking’. It was born out of the whole idea that if we have something on paper or digital paper that people could follow along, and even right now with COVID-19, they have something they could read from home and be an armchair traveller on the route.”

Newman and Wright have spent months working on the project, but she says there is still plenty of work to be done.

“There are lots, it depends on where you’re looking. When it was first proposed we would do the guide we decided to back it up and start from Lillooet. The guide right now is in three chapters. Chapter 1 is Lillooet to Clinton, Chapter 2 is Clinton to 100 Mile House, and  Chapter 3 is 100 Mile House to 150 Mile House, there are going to be more chapters including from Yale to Clinton, and 150 Mile up to Barkerville. A lot of the road is still in existence in some places. For example, in Chapter 2, the area from Clinton to 100 Mile House, there’s a lot of the road still existing that some people already travel. It sometimes has a different name, but people are using it as, let’s say, a snowmobile trail or a back road to get to their ranch. It’s quite variable, for example, the other day we looked at a little bit of the road that’s not in the guide yet down at the Spences Bridge and Lytton area. There’s going to be less of it down there, depending on where they laid the highway. In Lac La Hache, the modern highway has been laid the highway right on the road.”

Newman says it’s important to not tell the story of only the road.

“The guide and the route itself represent what a huge melting pot BC was at the time in the 1860s. It wasn’t just people from Europe it was Mexicans, Peruvians,  and South Americans. We’ve got a story from when we were ground-truthing, we came upon this road, “what’s the name of this road? where did it get its name? It’s called Raphael Meason Road, and it goes right near 70 Mile House, and the Cariboo Waggon Road. Through social media, I was able to hook up with a woman, who’s great-grandfather was a Mexican packer called Raphael Valenzuela. It’s not just the story of building a road, it’s also the story of people.”

While there is still a large amount of work to be done, the guides help provide a window into the Cariboo’s past. Chapters 1 through 3 are available on the New Pathways to Gold’s website.