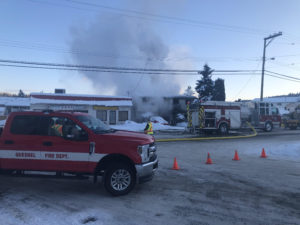 The Quesnel Volunteer Fire Department was called to the scene of a house fire just after three o’clock on Monday afternoon.

“Quesnel Fire Department was called to a structure fire at 520 Anderson which is right beside the Kakalots Restaurant. Two storey structure.   On arrival the structure was fully involved, and all occupants were out.

He says it is too early to say what caused the fire or where it started.

They responded with three fire engines, one water tender and about 16 members.

As of around 5 o’clock, Gauthier said that they had most of the fire out and were just dealing with some stubborn hot spots.

He expected them to remain on site into the evening.