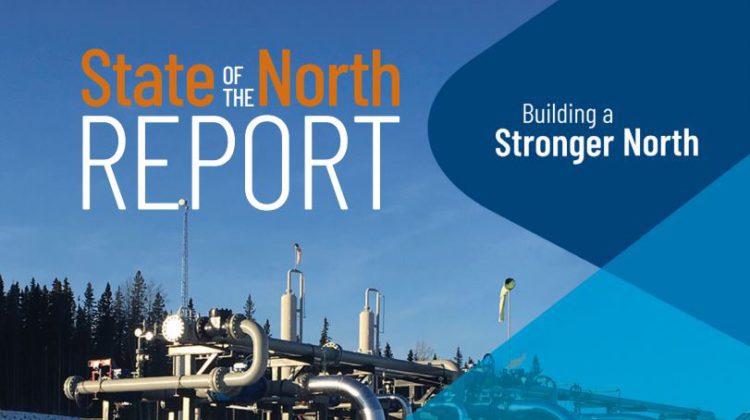 2020 State of the North Report (Photo provided by Northern Development)

The 2020 State of the North Economic Report by Northern Development outlined some surprising impacts the pandemic had on Northern BC’s economy.

According to the report, the overall impact of COVID-19 has been more moderate in the North as the region’s economy doesn’t depend as heavily on hospitality and recreation.

“Our economy in the North is more traditionally on industries like mining, forestry, oil and gas and clean energy,” explained Joel McKay, CEO of Northern Development, “and those particular sectors weren’t hit as hard by the shutdowns involved with the pandemic.”

Since there are fewer service-sector jobs that were heavily impacted by the changing provincial health guidelines, the North was better off than other areas of the province.

The forestry sector managed to do surprisingly well in the North throughout 2020, as the pandemic presented a unique opportunity to the sector.

“Once COVID hit, a lot of people at home took on home improvement and renovation projects and housing starts remained relatively strong, both of which are key indicators of the lumber being manufactured in BC,” noted McKay.

This led to the price of lumber reaching a record high last summer.

This comes after a particularly hard 2019 for forestry, as nine mills closed permanently in Northern BC, resulting in over 1,000 lost jobs.

According to the report, lumber prices are expected to remain relatively high through the end of 2020 and into 2021.

“The multi-year construction horizon, the thousands of workers, all the companies and businesses in places like Prince George that are working to support the construction of those projects meant that there was money flowing in the North,” he explained, “which saved the North’s economic bacon.”

Even though the tourism and hospitality sectors didn’t see as many visitors in 2020,  there were many construction workers that came and supported businesses such as restaurants and hotels.

“These three projects are expected to bring people to spend money in the North for the next 4 to 5 years,” McKay added.

Commodity prices for some base and precious metals such as copper spiked as well, which presented an opportunity for the mining industry to thrive in the North.

“That’s driving renewed interest in exploration activity and also some projects that are well established could also start being built for the first time,” McKay added, “we single out the Blackwater project south of Vanderhoof in the report.”

He explained that the Blackwater project could create significant long-term construction jobs filled by people that will spend money on hospitality businesses in the North.

Even though 2020 presented some significant opportunities for economic development in the North, the report explained the region will continue to face economic challenges for some time.