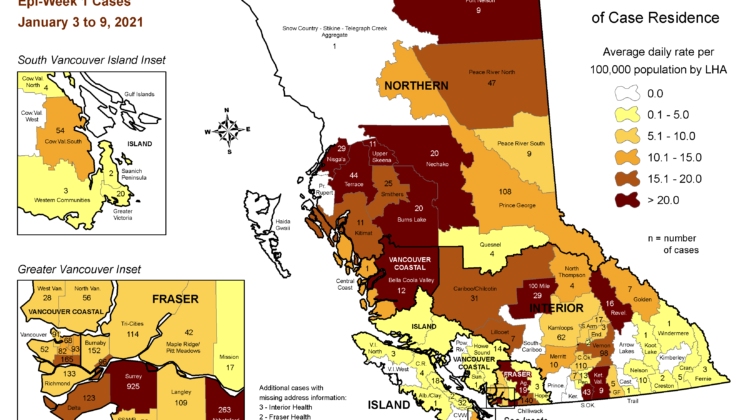 BC Centre for Disease Control

According to the BC Centre for Disease Control COVID-19 case count by local health area, Prince George led Northern and Interior BC with 108 cases of the virus from January 3 to 9.

In Terrace, 44 cases identified last week, for an average daily rate of twenty cases or more for every 100,000.

This was followed by the Cariboo- Chilcotin area, where 31 cases were found.

This was the same story for the Nisg’aa region.

25 people in the Smithers area as well, for an average daily rate of 15-20 cases.

Nechako and Burns Lake saw 20 infections each, the average daily rate continues to be twenty or more.

A total of 22 cases were reported in Kitimat and Upper Skeena.

18 were reported in Fort Nelson and Peace River South.

Four cases were listed in Quesnel.

This accounted for 396 infections total.