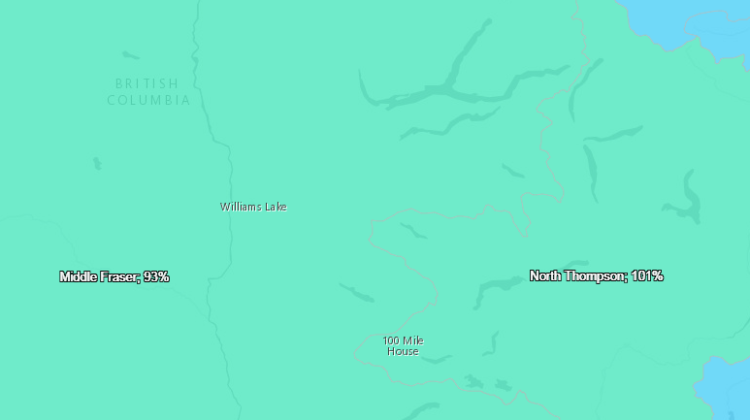 The BC River Forecast Centre’s (RFC) first snowpack numbers of 2021 have been released.

A large portion of the Cariboo Falls into the ‘Middle Fraser’ region, including Quesnel and Williams Lake. The Middle Fraser is reported as having 93% of the usual snowpack, but RFC Hydrologist Jonathan Boyd says the numbers are different in specific areas across the region. “The one thing about the Middle Fraser is that it’s geographically widespread and also quite diverse with the Chilcotin Plateau, and the bridge operations of BC Hydro, and extends down into the Nicola as well,” Boyd explains, “It wasn’t a very well designed basin when it was grouped that way”.

Numbers across the Middle Fraser are skewed by the diversity of the Region. According to Boyd, the area surrounding Quesnel is at 129 per cent of the normal, and the bridge region where BC Hydro operates in the Middle Fraser is at 79 per cent.

Unlike other Cariboo communities, 100 Mile House does not fall into the Middle Fraser. 100 Mile House is in the North Thompson region, which is reporting a regular snowpack at 101 per cent.

One thing that Boyd says the RFC was noticing was less snow in valley bottoms in areas such as Prince George, Kamloops, and Kelowna.