The Williams Lake RCMP is looking to the public for help in identifying a man who allegedly robbed the same store twice in three hours.

On December 13 at 4:39 a.m., the 7-Eleven Store at the 300 block of Proctor Street in Williams Lake was robbed by an unknown male armed with a large knife. At 7:08 a.m., the man returned and robbed the store again.

The unknown male made off with cash and cigarettes.

The man is described as indigenous, approximately 5’7 tall, medium build, and was wearing black shoes, black pants, a black jacket/sweater, and a blue bandana. 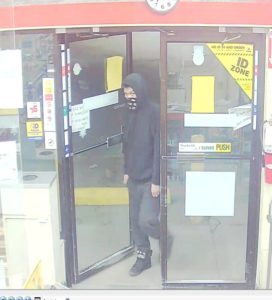 If you have any information regarding the robbery or the information on the male, you are asked to contact the Williams Lake RCMP Detachment via the non-emergency line at 250-392-6211.