It’s not what residents on a portion of Hutchcroft Street in Quesnel, who’s homes are being threatened by erosion along Baker Creek, wanted to hear.

City Council has approved a staff recommendation to relocate the Sewer Mainline that was damaged or washed away during this spring’s freshet. 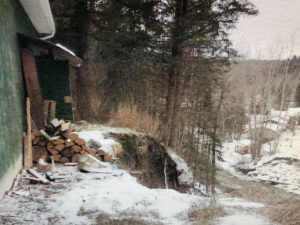 Unfortunately, as City Manager Byron Johnson explained, that also has an impact on those residents…

Johnson noted that when it comes to retaining walls or armor along rivers and creek banks, Council policy dictates that the owners’s share is 100 percent unless some of the city’s infrastructure is at risk.

“The old pathway along Baker Creek in which the pipe was formally placed will not be rebuilt.  That pathway served as a buffer to protect the properties adjacent to it from high water erosion.  Without this protection some properties on Hutchcroft Street, and along that area, may be at a higher risk than they were previously.”

Johnson did go on to say however, that Disaster Financial Assistance may pay homeowners compensation if they are forced from their homes because it got too damaged to safely live in.

Getting back to the decision to relocate the Sewer Mainline, Johnson said there are just two recovery options, with the other one being rebuilding it where it was…

“That would involve trying to rebuild the roadway in there, bringing in a bunch of material, trying to stabilize the bank, and putting some rip rap up.    Some of that old piping was on property trespass too, we never did get proper right of way, so there would potentially be some purchases of lands or formal negotiation of right of ways , and lots and lots of geotech issues with that project.”

“It eliminates the potential for damage due to another event like this last year.  There is no way to predict when we will get extreme high water events but they seem to be happening more often, and if we have the opportunity to move that it just seems to the appropriate answer to do so.   No purchase of lands required under this option or access agreements.”

Johnson said the impact of that is also that more of the project would be funded by Disaster Finance Assistance (DFA) because it won’t pay to purchase lands.

The project would also involve repairs to the storm sewer and trails.

The estimated cost of that is around 200 thousand dollars, with the city’s portion being only about 40 thousand of that.