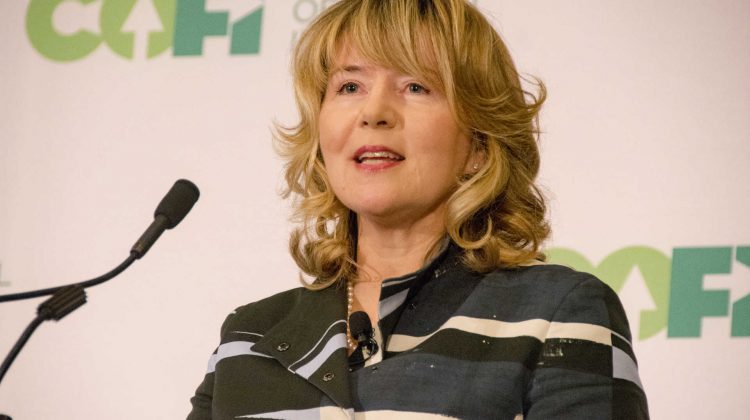 Susan Yurkovich (President of the BC Lumber Trade Council)

A step in the right direction.

That’s how Susan Yurkovich, the President of the BC Lumber Trade Council, describes Tuesday’s decision by the U.S. Department of Commerce to reduce the countervailing and antidumping rates on Canadian softwood lumber.

“It’s good news because we’re not paying 20.23 percent, we’re paying around 9 percent for the “all others” rate.   Having said that the fact that we’re paying any duties is still incredibly frustrating and disappointing for us, because as we have proven time and time again with this dispute, the Canadian industry isn’t subsidized and there should be no duties on softwood lumber going into the United States.”

Yurkovich says their hope is that the U.S. industry will end this decades-long litigation and instead work with them on growing demand for the low-carbon wood products that the world wants…

“We all want this long road of this dispute to be over.   We’re pleased that we’re moving in that direction, but as you know this can be temporary, and we are continuing to fight the litigation around this. Companies across this country want this dispute to be settled once and for all, and that’s the same whether you are a large global player or a smaller family run operation.   It’s in our collective interest to resolve this once and for all, and to not spend the time and energy and huge amounts of money.”

“After 18 months there is the first review and then every year thereafter, so this is the result of administrative review number one, and the period will start whenever the rates are posted likely on Monday of next week.”

Yurkovich says they are already in review number two period and they expect to get initial rates, preliminary rates on administrative review number two in the early part of next year, probably around February or March.

A final rate would then likely be announced in August.

She says these changes do make it difficult for companies to plan and creates volatility in the markets, which she says isn’t good for producers or consumers on either side of the border.

We asked Yurkovich if she felt a change in the U.S. government would have any impact on this issue moving forward…

“This dispute has been in place under both Republican and Democratic administrations.   Our hope though is that, we’ve had a lot of volatility over the last few years and what we are looking for is hopefully a little bit more return to normalcy, or some semblance of normalcy.   That would include more focus on the important institutions that govern trade relationships, a re-investment in the relationship between our two countries, and importantly respect for some of the institutions that govern global trade, including the World Trade Organization.”

Yurkovich says Canada had a significant victory at the World Trade Organization in the summer, but the US has the right to appeal that decision, and she says that process was halted.

She says there is nowhere to appeal it to because the U.S wouldn’t appoint their nominees to the Appellate Board.

Yurkovich says they are hopeful that the new administration will renew the very important organizations from a governance and a trade perspective, that are important for the trading relationships and dispute resolution.