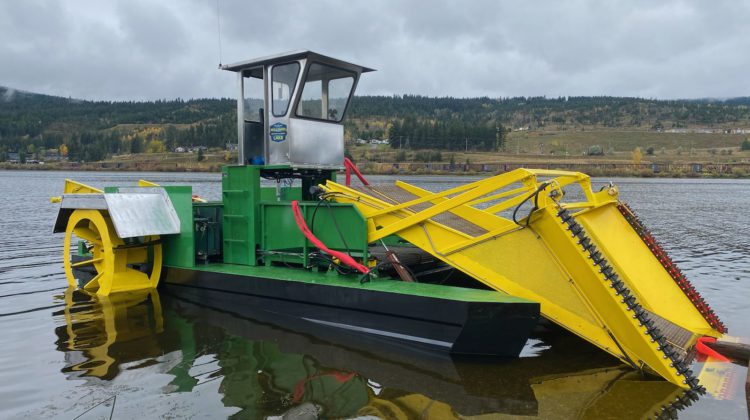 The Ministry of Forests, Land, and Natural Resource Operations has given the City of Williams Lake a limited permit to use its new lake weed harvester to protect animal habitat and other aquatic vegetation.

The City will be allowed to use the harvester at the Scout Island and Dutch Point boat launches, Scout Island public beach, and within the aerodrome vicinity on the northern shore of Williams Lake near Scout Island. The total estimated area for harvesting is 18,787.50 square meters.

Councillor Scott Nelson said that he is disappointed by the permit as it doesn’t allow them to accomplish what they set out to do.

“We applied for the entire to be done, the Ministry came back and said no, so we applied for half for the lake to be done, and what they’ve given us is two little cashews to munch on here to get started,” he said. “I think we take what we’ve got but obviously go back, and we look to do the right job, and that’s clean up the entire lake. From my perspective, I think this is a start, but I think the community has been encouraging us as the council to really invigorate the lake, make it cleaner, safer, more usable, and this plan that’ in front of us just simply doesn’t do it.

Under the permit, the City will have to hire a qualified professional who has experience handling Western Painted Turtles to work with crews running the harvester.

CAO Gary Muraca said that the Ministry is fully aware of the City’s plans.

“We want to be able to do a larger area, so we will use this two-year term to demonstrate proof of concept as well as proof of our responsibility when dealing with the environmental concerns that they have,” he said. “We will demonstrate that we are being responsible, and our second permit will be putting in the areas of north and south lakeside as well. They are aware of our intent, and that’s where we will be going in two years.”

All instream works shall take place between October 15 until the lake freezes.

The City purchased the weed remover earlier in the year before receiving a permit for use.