Quesnel City Council to tackle racism in the community 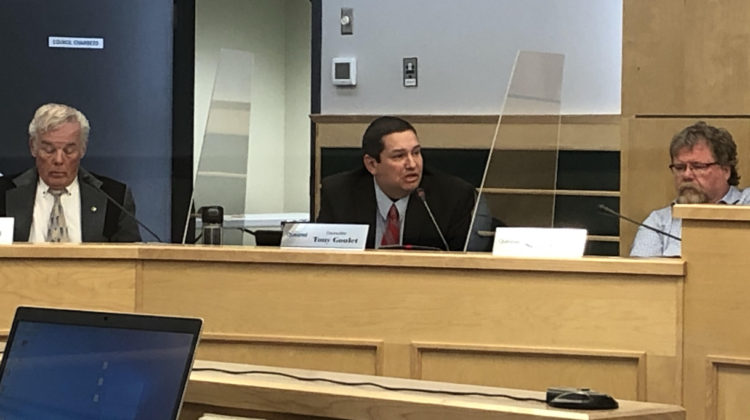 Tony Goulet (GHenderson-MyCaribooNow-staff)
Responding to a news release from the Southern Dakelh Nation Alliance calling on the RCMP to investigate systemic racism and violence against indigenous peoples in Quesnel, Council has agreed to start working on a number of initiatives.
That includes potentially signing on to the United Nations Declaration on the Rights of Indigenous People, and the calls to action of the Truth and Reconciliation Commission, developing and adopting an anti-racism strategy for the City, as well as conducting anti-racism sensitivity-training and improving the knowledge of staff and Council regarding local indigenous culture and history.
Councillor Tony Goulet noted that it was timely and that it had his full support…
“I support this 100 percent and I think we’re moving in the right direction.    I think there will be more to come as we work through this and understand what the Human Declaration of Rights really is and really says.   There are lots of pieces in there that need to be dealt with from language, housing, social problems to the whole nine yards, so we’re just on the surface of something huge.”
Councillor Ron Paull, while in support of the motion, wanted a change in the wording when it came to the anti-racism and sensitivity training…
“I would like to see some reference in there that we are cognizant to other visible minorities in addition to indigenous.   I think it extends through all of society and not just for the indigenous population.”
Mayor Simpson, while maintaining that the motion captures racism at large and is for all races, noted that Paull could make a friendly amendment when the time comes.
For now he says it is just a workplan that will go to the Policy and Bylaw Committee before coming back to Council.
The media release from the Southern Dakelh Nation Alliance comes after what it describes as a violent incident at the West Park Mall, where a young indigenous woman from Ulkatcho was violently restrained by a security guard using excessive force and aggression.
Mayor Simpson says he and the Chiefs were told by the RCMP that they are investigating all aspects of that incident.
Simpson also noted, and Councillor Goulet agreed, that it’s not always about a specific incident but about the pain that that incident triggers…
“It triggers that historic extinguishment of rights, the attempt at extinguishment of a culture through the residential schools, and I think that we need to everything that we can to make that right in our generation.”
Simpson says in his mind Council making a commitment to do the work on all of this is part of a continuous improvement of an ongoing process the city has had over the last six years with First Nations communities in the area.