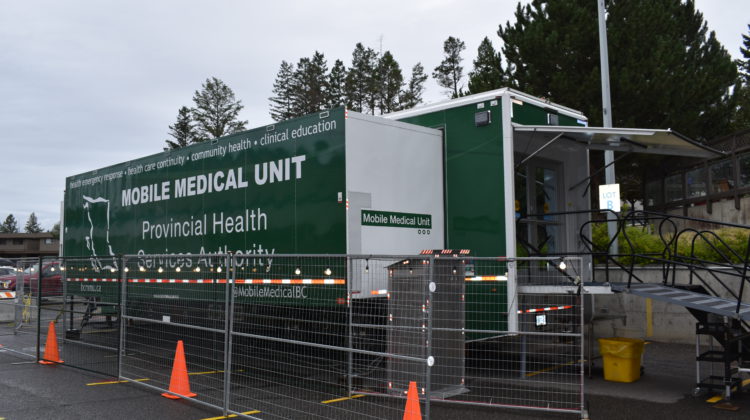 The MMU will be set up until Mid-September. (All photos by Tanner Wallace-Scribner, MyCaribooNow staff)

The province’s Mobile Medical Unit (MMU) is being deployed to Williams Lake to give extra space while the Cariboo Memorial Hosptial undergoes renovations.

The emergency department and waiting room will be receiving repairs as flooding from earlier this year caused damages. The renovations are set to start within the next week, and they will last until mid-September, with the MMU being deployed until construction is completed.

The MMU is a 16-metre tractor-trailer that expands to a 90-square metre flexible facility with up to six to eight treatment bays for patients.

Thalia Vesterback, the director of clinical operations for Williams Lake with Interior Health, said that they would be transitioning all three ICU beds into the MMU.

She added that they would be moving patients over tomorrow (Friday) and transitioning the ICU to the emergency department over the weekend.

Vesterback said that there wouldn’t be any change of services for the public, just where they go.

“For the public coming to the hospital, the ambulance and emergency entrance will be close to the access in for the emergency department will be through the main door,” she said. “We will make sure there are clear signage and direction from staff.”

As for staffing, Vesterback said that they would be adding more while the unit is deployed.

“We are adding staff where we need to ensure that we have reasonable staffing levels for staff safety, patient care, and controlling, and ensuring safe access to the facility.”

A look at the inside of the Mobile Medical Unit. Staff are still setting up equipment in preparation for the ICU unit.

Peter Hennecke, clinical operations director with the Moblie Medical Unit with Provincial Health Services, said that this is the first time the unit as been deployed to Williams Lake, despite being around since 2010.

“We are apart of provincial health, and we support all of the health authorities in B.C. for everything from renovations to disasters, to education, community outreach, and for this particular mission we are supporting Interior Health with the renovations to there site.”

The clinical capacity of the unit can range from low acuities such as primary health care and outpatient clinics to emergency urgent level care or highest acuity, including critical care and emergency surgical care.

The unit will be connected to a hospital’s power and water system, as well as the hospital’s I.T. system.

Hennecke added that the unit will be the same as the normal ICU, just in a different workplace.