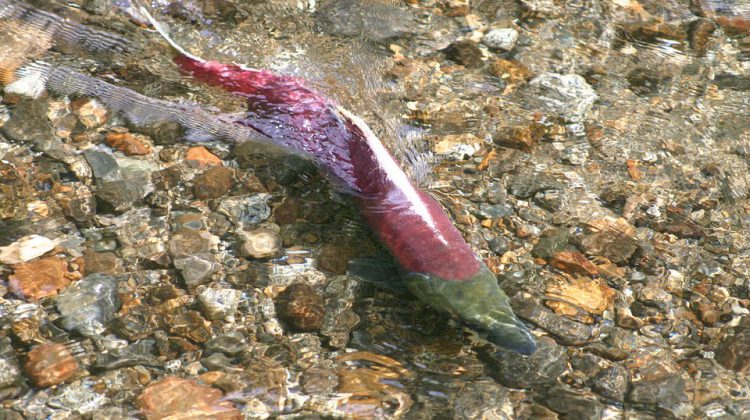 A run of sockeye salmon is having trouble making it up the Fraser River, mostly due to the ongoing Big Bar landslide, according to a report from the Pacific Salmon Commission.

It is believed that the massive landslide that occurred north of Lillooet in late October or November 2018, but wasn’t discovered until late June is part of the reason why the fish are having trouble making it to there spawning grounds this year.

Fiona Martens, chief of fisheries management programs at the Pacific Salmon Commission, said that the trouble for the fish is also associated with high discharge levels.

“The first management group that we see with Fraser River sockeye are known as the early stewart group, and so they are the first ones that migrate up the river and are the ones experiencing this high discharge level in the river,” she said. “Right now we have fish passing the Mission (monitoring stations) we’d expect to have seen just under 20,000 of the fish, and they’ve seen in the Big Bar area very few sockeyes in the area. This indicates that there is some delay in the river, and this just reduced the changes for a successful migration to the spawning ground, and this is based on our current models are predicting fairly high mortality rate with this discharge.”

Martens said that if this continues, there could no sockeye making there through the Frasier River eventually.

She added that over the last four years, they have seen fewer fish, making it through the river.

The Fraser River Panel expects total salmon returns will be less than one million fish this year.