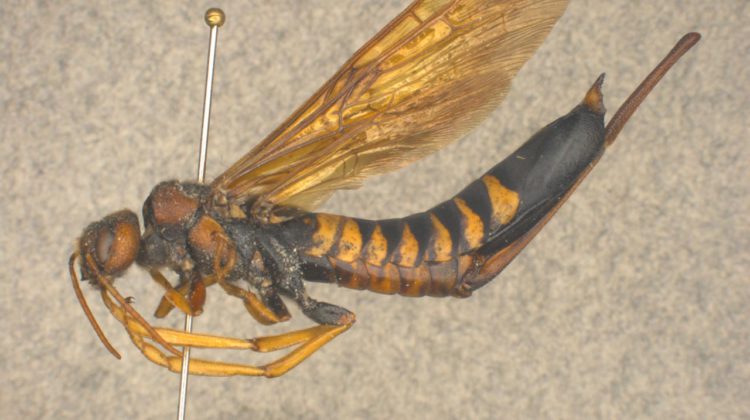 There are still no confirmed sightings of the Asian giant hornet in the Cariboo, despite what some people may think.

Debra Wytrykush, a Forest Entomologist with the Ministry of Forests, Lands, Natural Resource Operations and Rural Development, says Cariboo residents have sent her several samples and photos of wasps to her recently, but she says they have actually turned out to be what are called wood wasps or Horntails.

“The biggest concern people have expressed to me is when you look at a wood wasp they have what looks like a really long stinger coming out of the end of their abdomen, and it’s actually not a stinger.   It’s an ovipositor and the female uses that to deposit her eggs into old downed and stressed trees or rotten logs, so it has nothing to do with stinging people and the females will never sting a person.”

Wytrykush says when she deposits her eggs into the wood the larvae don’t really digest it, so she actually carries fungus that she deposits with her eggs.

Wytrykush says she understands the confusion between the Asian giant hornet and the wood wasp however, as they are similar in size…

But Wytrykush says their bodies are shaped differently…

“A wood wasp, I would say, looks kind of chunky and squared off versus the Asian hornet looks like your typical hornet with a skinny little waste and sort of like a big bulgy fat abdomen.”

Wytrykush says while an Asian hornet was spotted in Langley, there are no confirmed cases in Northern BC.