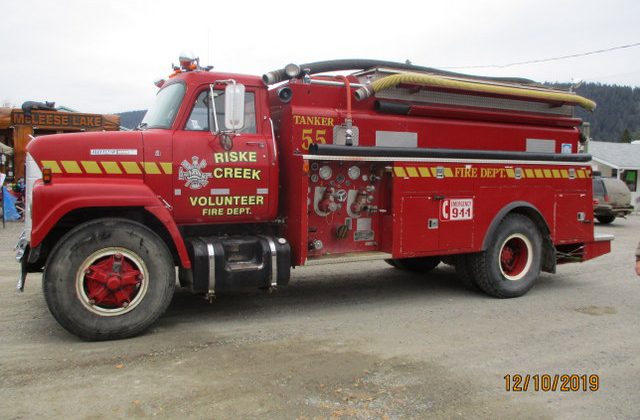 Riske Creek is one of the ten independent fire departments affected by the CRD's decision. (supplied by Sue Peter)

The Cariboo Regional District (CRD) has doubled down on its decision to cease funding for independent fire departments.

At their July 10 board meeting, the CRD stuck with their decision that was made the prior month to deny current funding requests from five independent volunteer fire departments in the region. They also established a board policy against grants for assistance to all independent fire departments within the district.

The Big Lake, Horsefly, Chimney/Felker, Likely and District, Tyee Lake, McLeese Lake, Greeny Lake, Riske Creek, Hawkins Lake, and the Watch Lake-North Green Lake fire departments will all be affected by the decision. They will continue operations as normal, except without the funding of the CRD.

“Over the years, we have provided funding towards the services, and there was a question of whether this was appropriate,” he said. “The board asked for and received a document that looked at the funding question from all angles, legal risks, liability, and after reviewing all of that information the board made the decision that we are not interested or going to be proceeding with funding independent fire halls in this way any longer.”

The decision was made primarily because of the ten fire departments’ legal status. Three are unincorporated societies, and seven are incorporated societies. Both categories present legal and financial challenges for organizations. The CRD had concerns that providing grants for assistance may be seen as tacit support for the independent departments, which left the regional district open to lawsuits if it is perceived as an ‘authority having jurisdiction’ – liable for actions taken by an independent volunteer fire department.

MacLean said that the decision had nothing to do with the fire departments themselves.

“No one here is questioning the efforts or the commitment to those organizations and what they provide to their communities,” he stated. “That is not our position, but the regional district is a service-based organization. We exist to provide services, and independent fire services are not our services. We do not tax for them; they are not part of our organization. It’s not a decision that is made to slight anybody, that is not interest.”

“The board is making sure that it’s considering the interest of all of the residents in the regional district,” MacLean said. “When we looked at these funding decisions, and the totalling of the information they had, the board felt it was in the interest of the Cariboo Regional District as a whole.”

As to what the decision will mean for the residents in the district, MacLean added that it would leave more money in “taxpayers’ pockets.”

The new approach does not have an impact on the 14 volunteer fire departments (17 fire halls) currently operating as CRD funded and managed organizations.