Friends travelling through Cariboo hoping to raise awareness and money 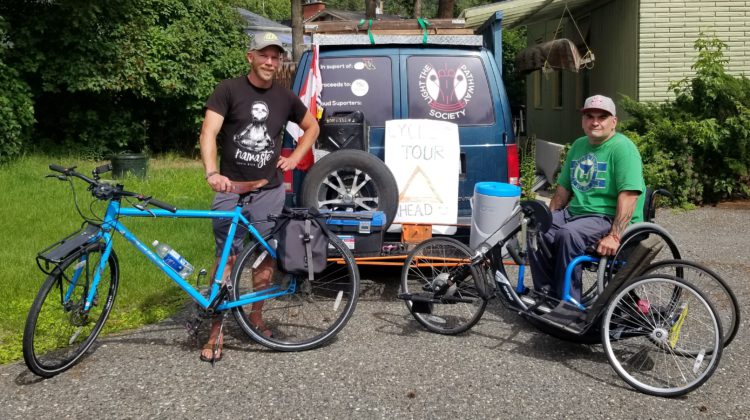 One month ago, two men set forward on a journey to raise awareness for mental health and money for Boys and Girls clubs.

The Light the Pathway society was started last year by Tyler Waddell when he rode his bike across B.C. and to the Yukon. This year he is doing the same thing, but he has brought along his friend Toni Fazeli, who will be doing the trip a little different as he will be using a handcycle.

The pair started their trip in Vancouver and are currently passing through the Cariboo, including a trip through Williams Lake Tuesday afternoon.

“Before I experienced any traumas growing up, I remember being so free on a bike. It’s such a freeing feeling and to kind of that,” Waddell said. “Going 3,000 kilometres last year and seeing everything, moving forward and watching everything move so much slower, it’s changed my life forever.”

Any money raised from the journey will go towards the Sunshine Coast, Williams Lake, and the Yukon Boys and Girls Clubs.

“It’s a tremendous organization, and both of us growing up, as single parents, these clubs are there, and they help so many people,” Waddell said when talking about why he chose the Boys and Girls Club. “That’s one of the huge things is when people reach out their stories and how the clubs either changed their lives as kids or helped them out as parents, and they’re struggling right now.”

Fazeli, who joined after Waddell’s journey last year inspired him says he hopes he can do the same for others, especially when it comes to mental health.

“Anything for mental health, because there are so many people who are suffering and dying. People should not be taking their lives and leaving their family and loved ones behind just because of what is going on in their heads, and it’s getting worse. That’s why we want to do it,” he said. “They think they are a burden to someone. People need to talk about their feelings and what’s going on in their heads and come up with ways to figure out how to make that better. The way I’ve been brought up was to not talk about, mask it, and put it away.”

Fazeli said that not only is he excited to be able to raise money and awareness for two worthy causes, but he is also happy to challenge himself.

Both noted that the support they’ve received along the way has been amazing.

“From people honking, slowing down, the Days Inn in 100 Mile House, they went over and above, people helping, it’s beautiful,” said Waddell.

“We don’t even know who they are, and people will be like you’ve inspired me to grab a bike and do this and share a little bit of story. There are people who are actually looking forward to our posts all time, just to see a picture and where we have gone so far, how far we have come,” Fazeli added. “Just to see out of know where that these people are interested and are getting inspired by it, this is what we are doing it.:

Waddell said, looking forward, he hopes that they can expand the journey and see more and more people join on the trip but is already blown away by the number of people he has been able to reach.

“At this time last year, I was reaching 100 people. We posted last night (Monday), and it’s reached 4,000 people just with one post,” he said. “It’s far behind anything I could possibly of dreamt of.”

The pair hope to be making it to Quesnel Wednesday, and Prince George on Thursday and encourage people to follow along on their Facebook page.