UPDATE: RCMP still looking for driver of semi that caused $120,000 damage to the Quesnel River Bridge 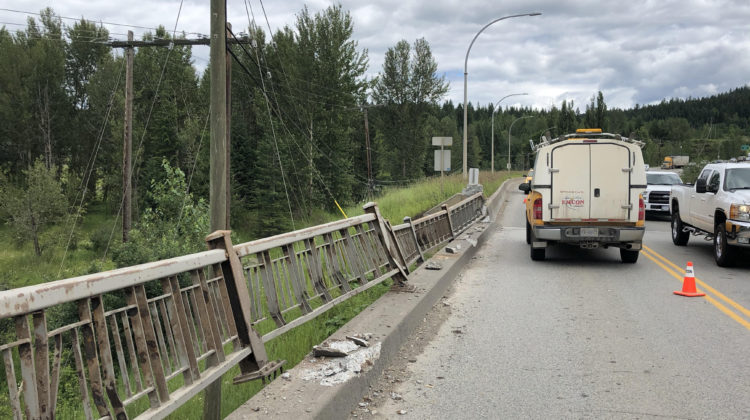 Damage done to Quesnel River Bridge (GHenderson-MyCariboonow-staff)
Quesnel RCMP are now looking for a different driver of a semi truck that crashed into the side of the Quesnel River Bridge yesterday in what is being described as a hit and run.
Sergeant Richard Weseen…
“Witnesses provided a license plate of a blue transport truck which was later confirmed not to be the suspect vehicle.  With the extent of the damage to the bridge, and the vehicle debris left at the scene, the police believe the driver of the vehicle was well aware of the collision.”
Weseen says they continue to investigate and are seeking help from the public…
“The police are asking for anyone who can identify the transport truck, or has dash cam video of the incident, to call the Quesnel RCMP at (250)992-9211, or Crime Stoppers at 1(800)222-TIPS.”
The accident caused major traffic delays and did extensive damage…
“On July 13, 2020, at approximately 11:40 am, a northbound transport truck struck the bridge guard rails and failed to remain at the scene. The damage to the bridge was extensive and repairs are now estimated at around $120,000.”
The bridge was down to one lane for approximately four hours, and Weseen says the police also responded to numerous calls regarding frustrated drivers that were conducting unsafe u-turns and driving the wrong way across the Johnston Bridge as a result of the backed up traffic.

Sergeant Richard Weseen goes over a few of the details…

“Just before noon a blue Peterbilt semi truck was travelling northbound on Highway 97 and struck the Quesnel River bridge, and it caused significant damage to the railings.”

Weseen says police have located and spoken with the driver of the truck and an investigation continues.

There was actually some damage done at around the midway point of the bridge as well as the truck struck the side a  second time.

Weseen says traffic is now limited to single lane and is moving slowly.

Motorists are asked to avoid the area if at all possible.

Weseen says Emcon Road Services is on site and flaggers will probably be on site for several hours before the bridge may be open to two lanes of traffic.