Quesnel Mayor says Council is not against supportive housing, they are just looking out for the public interest at large 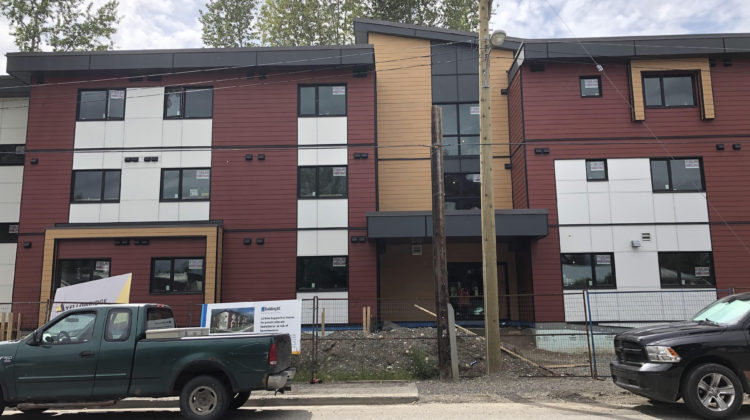 Elliott St. Supportive Housing project (GHenderson-MyCaribooNow-staff)
Mayor Bob Simpson says that is the motivation behind some requests that Council is making to the Quesnel Shelter and Support Society and BC Housing regarding the Bridges Supportive Housing Project on Elliott Street in West Quesnel…
“We don’t want Bridges to go down the path that shelter went down in terms of shifting gears on what they were offering, the kind of client group that they had there, and some of the spillover we had into the immediate area and into the downtown core, so that’s what we’re trying to prevent.”
Simpson suggested, and Council agreed, to three requests…
“Door to door canvassing be undertaken by the Shelter Society prior to or immediately after the opening of the Bridges, our preference is prior to so there are no surprises.   The second that the Good Neighbour Agreement feedback opportunities are monthly for at least the first six months of the operating of Bridges.   And thirdly, that a  meeting be established as soon as possible after the opening of Bridges between one of our standing committees, the Shelter Society and BC Housing, to immediately begin to discuss the future of Seasons House.”
Councillor Tony Goulet noted that the Good Neighbourhood Agreement already talked about public engagement…
“It does specify that they were to have monthly meetings and a six month report, and that was signed in 2018, and here we are in 2020.    So we need to have those monthly meetings and continue to do that and push that we have these monthly meetings, I think it was quite specific in the agreement that was signed .”
The Quesnel Shelter and Support Society is holding a public meeting on July 22nd from 1 until 3 pm.
Due to Covid-19 it will be a teleconference and people must register on their website at www.qsss.ca/events.
Bridges is expected to open its doors in late August or early September.
It will feature 32 units, four o which will be support recovery units, and there will also be support services on site for residents with addiction issues