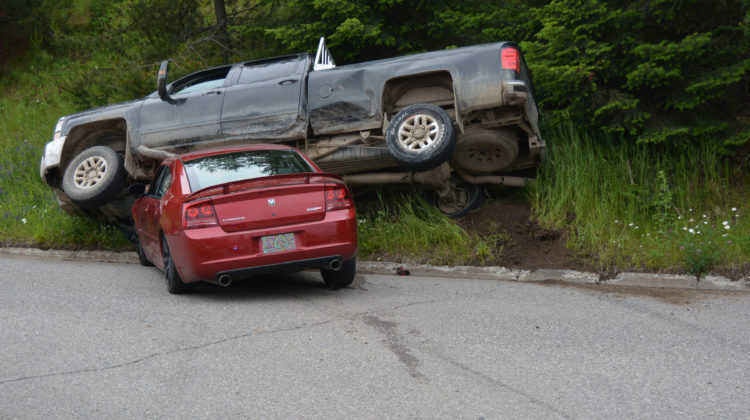 A 39-year-old Prince George man has been criminally charged with dangerous driving, and could potentially lose his license following an incident on June 30th.

The BC Prosecution Service has approved the charge against Brandon James Peters, says Corporal Craig Douglass, with the Prince George RCMP.

Just before noon on Tuesday (June 30), The Prince George RCMP responded to multiple 911 calls reporting a two-vehicle collision and disturbance on Highway 97 at Houghtaling Road.

Witnesses reported that a car had “t-boned” a full-size pick-up and continued to push the truck across three lanes of the highway and over the curb, leading to a physical fight between drivers.

Witness accounts indicate the driver of the vehicle had deliberately crashed into the pick-up and pushed it off the highway.

A number of vehicles traveling on the highway at the time had to abruptly brake to avoid being a part of the incident.

The driver of the car was attempting to walk away from the scene but was arrested soon after.

Police report the incident was a result of a dispute between the two drivers who were known to each other.

Peters was held overnight for virtual court, where he was released on strict conditions including no contact with the woman involved in the dispute.

He is scheduled to appear in court again on August 5th.

In addition to the Dangerous Driving charge, a High-risk Driving report will be forwarded to the Superintendent of Motor Vehicle for consideration of a driving license prohibition.

The Special Investigation Unit at ICBC will also be advised about the circumstances of the crash.

“This matter is still under investigation and further charges are possible,” says Douglass.

Police are seeking any witnesses or dash camera footage of the two vehicles operating prior to the collision.

The drivers were not injured, however, the female occupant received minor injuries.

Drugs and alcohol are not believed to have been a factor in this incident, according to Douglass.

Traffic was affected for a number of hours as investigators gathered evidence and cleared the scene.