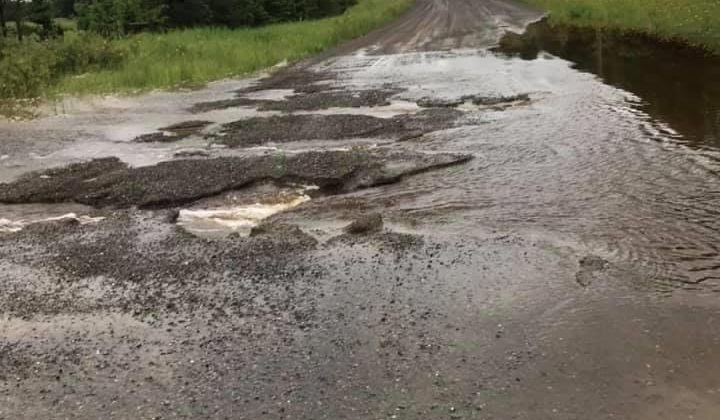 All of the rain over the past few days hasn’t really made the road situation in the Cariboo worse, it has just delayed the repairs to those sites.

That from Todd Hubner, the District Manager with the Ministry of Transportation and Infrastructure…

“A lot of the shoulders on all of our roads are very sensitive right now, they’re totally saturated, so very weak, we have seen some minor slips on some of our existing roads that hasn’t impacted traffic but those are just an indication that all of the soils that are out there are incredibly saturated so we’re going to have to really wait for things to dry out.”

“I believe it was at last count.    Areas that we’re closely monitoring right now is basically the Quesnel-Horselfy River systems.   Those were banked full in advance of this rain, so they are very sensitive to additional precipitation, so routes such as the Black Creek Road, the Quesnel-Hydraulic Road.   And of course we’ve got the slippage just north of Quesnel there, just north of the Cottonwood Bridge that we’re continuing to monitor as well.”

Hubner says they have been able to do some preliminary work on Quesnel-Hydraulic Road, as they’ve flown over to get a better understanding of the bigger picture.

“We’re dealing with an issue right now in the vicinity of Felker Street which is in Lac La Hache.   We’ve got some flooding that we believe is coming off a private parcel that is coming down towards the Highway right in the area of Fast Track Gas, so we’re working collectively with the CRD and local agencies on that one, but all of our routes remain open in that area as well.”

Besides the Cariboo, Hubner’s area extends down to Spences Bridge and includes Cache Creek…

“Cache Creek for us was kind of ground zero for us yesterday.   We saw 71 millimetres of rain down there in 30 hours so it has certainly aggravated some of those sites, and we’ve actually got one route there, Loon Lake Road that is currently closed because of that.”

Hubner says the Sky Ranch Road in the Big Creek area may also be closed.

He says there is some localized flooding along the Highway but the rain has now stopped and he doesn’t think that it will have to close because of debris flows, a concern that was raised on Drive BC this morning.

“At this point everything is stable down there. If the past is any indication, when we do get these debris flows it’s usually during the event, not post-event.”