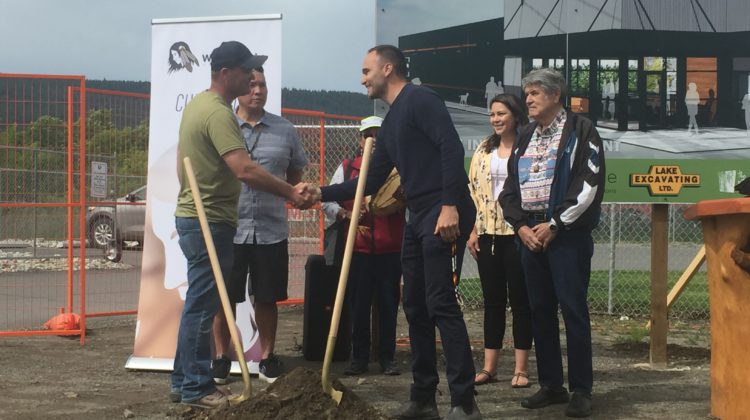 The Williams Lake Indian Band held a groundbreaking ceremony for their farm to gate cannabis cultivation facility to be built on IR#6 next to Indigenous Bloom.

“The project we’re here to break ground on today is an exciting one and one that has been in the planning for more than a year and a half. Sugar Cane Cannabis will be a state-of-the-art, 7,000 square foot cannabis cultivation facility and it will be the very first facility of its kind in British Columbia, and to the best of our knowledge the first such Indigenous-owned facility in Canada”.

Sellars said they are very fortunate to have strong support for this project from a number of funding entities.

Sellars added that the remainder of the project will be funded directly by Williams Lake First Nation through its own source revenues.

Sellars said efforts to get the project off the ground has not been without challenges, the most significant being the relationship with the City.

He thanked Councillor Scott Nelson for his attendance at the groundbreaking, offering the City and the City Council to sit down and discuss some of the issues that they’ve been having to date so that we can move forward in a partnership and collaboration and really do some good for this region.

Sellars added in order for the Williams Lake First Nation to strive and excel we also need the City of Williams Lake’s support.

Sugar Cane Cannabis cultivation facility is scheduled to open in the spring of 2021.

Evacuation Alerts Lifted For Five Properties In The South Cariboo

BC extends pandemic supports through summer