Canadians for Fairness and Transparency has launched a new website in the Chilcotin. 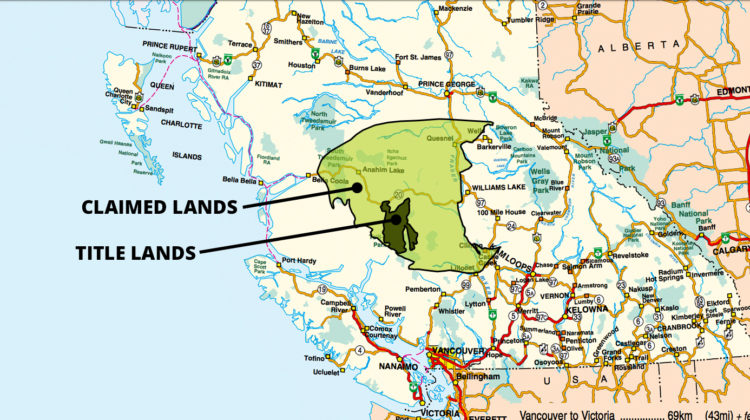 Map provided by Canadians for Fairness and Transparency
The site, at www.canadiansforfairnessandtransparency.ca, is born out of frustration over being being shut out of what they call “secret” land negotiations in the Chilcotin between the Tsilhqot’in First Nation and the Federal and Provincial governments.
The group represents ranchers, residents, tourism operators and communities.
Petrus Rykes, President of the West Chilcotin Tourism Association, says their concerns have fallen on deaf ears when it comes to government so they are taking their concerns public…
“We’re going to let the public know what’s going on behind the scenes and all the stuff, like I say, everything is being done in secret and that’s not, as far as I’ve been brought up how a democracy works,  but anyway, they seem to like that idea.”
Rykes says they are looking for four things…
“One is transparency, another one is that we have representation there, and one that there is compensation for people losing their private properties, or businesses.   We’re basically after government on this because they’re the ones that are supposed to be handling this and as far as I’m concerned they’re dropping the ball on it.”
Rykes says it shouldn’t be done this way…
“I’ve been involved in land use planning for over thirty years with First Nations, and all I know is you need all stakeholders at the table to get a sustainable solution, and by disregarding the main players out there and you know, their homes and their lives are effected.     Anyway it’s something, like I said, we need some clarity, we need some accountability from government to make people feel reassured and we’re no getting that right now.   2014 was the court decision and nothing has happened since then.”
Rykes says the feeling right now is that everything is being done behind closed doors…
“They said we’ll touch base with you at the right time.   Everything is done in secret, why do you need to do it in secret in the first place unless you’re hiding something ?   So there is what you call a lack of trust there.”
Rykes says substantial limitations on tourism and ranching operations have already been imposed as a result of the 2014 Title agreement, threatening and in some cases destroying the viability of businesses, residences, and communities across the region.