Sylvain Gauthier, the city’s Emergency Services Coordinator, says the state of local emergency has been extended for a second time…

Gauthier says the one homeowner remains evacuated as well. 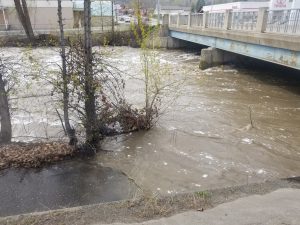 Looking ahead to the warm weather on the weekend, Gauthier says it is unlikely Baker Creek will come up, but he says we will likely start to see the Fraser River rise…

high teens, so we are expecting the Fraser to rise this weekend, but not to the flood level yet. We’re not even close to the level where we have to start worrying. We have a lot of room to play with.”

Gauthier says the low snowpack is gone and now we’re working on the mid level snow.

“Once we start hitting the 27, 28 degrees, then it’s going to be the peak of the mountains, so right now we’re basically to what I like to call phase two.”

The Fraser typically peaks in late May or early June.