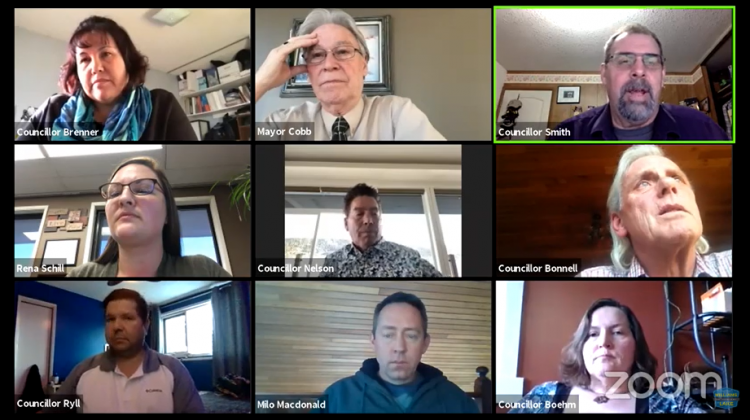 The City of Williams Lake will be allocating $100,000 from its restricted surplus fund after agreeing to establish an emergency fund in response to the novel coronavirus pandemic.

“Taking the note off of Council’s discussion we had a couple of weeks ago with regards to being able to establish an emergency fund to support the request of emergency equipment that may be outside of the typical box that is not budgeted for was the intent behind this particular resolution,” said Councillor Scott Nelson. “We’re looking to be able to support the doctors and the nurses with these particular types of items that they can’t immediately get access to…”

Nelson added there is room with adjustments inside the existing budget to establish the fund, and that they will try to recover some of the funds through the Emergency Operations Centre.

“What we’re trying to do is make sure that there is equipment that they can’t access, that we can access because of some of the protocols that we’ve got or they haven’t got,” he said. “The way we would deal with it is we would do a quick poll of Council for the various items. What we’re trying to do is streamline this to give it to Council if something of an emerging nature came up where they needed something we would buy it and donate it back.”

Mayor Walt Cobb said the procurement process through the province and Interior Health is a lengthy one.

“This would only be used if there was something we had access to,” Cobb said. “If this hits [COVID-19] us as much as they say it can hit in the next couple of weeks, there might be something that we’ll be able to get in a day or so where they’re going to have to take a month or more, and by the time the month happens, it’ll be too late…So it will be an extenuating circumstance. Hopefully, we won’t have to use it but at least it makes it available if the need arises.”

Because support for hospital services and long-term care services is funded municipally through the Cariboo Chilcotin Regional Hospital District (CCRHD) Councillor Ivan Bonnell said he did not accept why Council would establish a special fund when there is already a fund in place at the regional level for that type of support.

Cobb said the bylaw at the CCRHD stipulates that any purchase has to be approved through Interior Health prior to any purchase.

“That’s the dilemma that we’re in,” Cobb said. “Through Interior Health unless it’s approved prior to they can’t approve it at the Cariboo Chilcotin Regional Hospital District.”

The CCRHD could however according to Bonnell amend its bylaws, as is the City, for the state of the pandemic.

Councillor Marnie Brenner who works at Cariboo Place said it is becoming increasingly difficult to obtain masks and gloves.

“I have a case of masks and now I’m not able to buy any more masks. We’re not getting any more until the end of May,” she said. “We’re not able to get them easily, and that’s a long-term care facility. We’re doing what we can do at our site to make sure that COVID-19 doesn’t come in the door by restricting visitors and we’re being successful so far, but I can’t imagine the hospitals, they are the go-to place.”

Bonnell said he is of the opinion that the City will not be able to secure or procure any sort of these supplies faster than any other provincial or regional authority that is out there.

“They’re all hunting for the same equipment,” Bonnell said. “So I’m just back to my point, I’m not in support of creating this fund for this purpose.”

Nelson said they would not recommend putting forward $100,000 if they did not have to do this.

“The whole principle behind this is we think that we’ve got additional channels where we can access equipment that they may not be able to,” Nelson said. “So that’s all that we’re trying to do, is put a back-stop in place and I think that’s extraordinarily smart and very proactive.”

Chief Adminstraive Officer Milo MacDonald said the City was able to source some N95 masks that others, including Interior Health, were not able to.

Councillor Sheila Boehm said she agreed that she believes there is a lot of opportunity, and that to help procure emergency items it is not a bad idea.

“Everybody is having to pull an extra; we’ve got businesses donating,” Boehm said. “This is unprecedented and if we can help in any way, we certainly want to look like we’re helping and we want to help our community. And if you’ve ever worked in a hospital, it is very slow to get equipment especially if it’s going to go through Interior Health because it’s in Kelowna…”

Councillor Craig Smith said he agreed to some degree with Bonnell, and that because he works with the Xat’sull First Nation he knows that items being sourced by the First Nations Health Authority and Interior Health are becoming harder to get.

“My worry and my caution is this is not going to be done in a couple of weeks,” Smith said. “We need to look at this long-term. If you’re listening to everything that’s going on we’re talking about six to eight weeks before we hit a peak and there may even be a second wave coming in the fall, so we have to be very thoughtful of how we’re spending taxpayer money…”

Adding to the recommendation that the relief fund is created, Councillor Jason Ryll asked that the CAO and Mayor have discretionary spending limits of up to $10,000.

It passed with Councillor Ivan Bonnell, the only councilor not in support of it.