More
Facebook
HomeNewsOwner of Williams Inn has until the weekend to cleanup debris pile...
NewsWilliams Lake

Debris from a fire at the Williams Inn will soon be cleaned up according to the Mayor of Williams Lake.

Walt Cobb says the final days for what he calls a “big eyesore” will be coming to an end.

“They have until this weekend to proceed or get what’s there cleaned-up.”

“If they don’t then we will have a second phase we’ll have to do and go through a remedial order similar to what we did with the Slumber Lodge and give them a time frame and if they don’t do it we’ll (City) do it and they (owner) will be sent the bill.”

The debris is from a blaze that consumed two vacant buildings of the Inn back in late December.

Cobb says another “eyesore”, the Slumber Lodge has until the end of this month for the owner to meet their requirements under a remedial order, at which time they don’t the City will proceed with demolition.

As of noon crews were cleaning up the front of the Williams Inn with some interior work being done as well with the debris pile still remaining untouched. 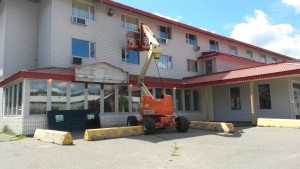