A fire mitigation project assisting seniors and community members facing mobility and or mental health barriers is once again taking place in the Cariboo.

Led by United Way the project started in October 2018 and has once again received an extension. 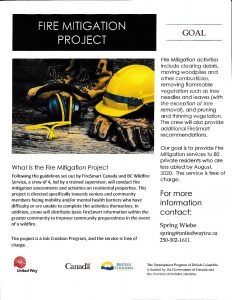 He says they are aiming to do 80 more in each of the three communities.

“I think it’s been really successful,” Dodge says. “It was a little hard to get the word out originally but when individuals saw what great work we can do and it’s all free of charge then they spoke to their neighbors or friends and we were invited to events.”

Dodge says because it is the wintertime individuals tend to forget about fire danger that is just around the corner.

The Fire Mitigation Project will run until the end of August 2020. It is a Job Creation Program, and is funded by the Government of Canada and the Province of BC.

“Not only was it extended but there’s also a project that has a team in Kamloops, a team in Barriere, and two in Clearwater this year as well,” Dodge says. “The crews that we hire are all EI eligible individuals who have lost employment, so we provide training for them so that they’re able to find other jobs.”