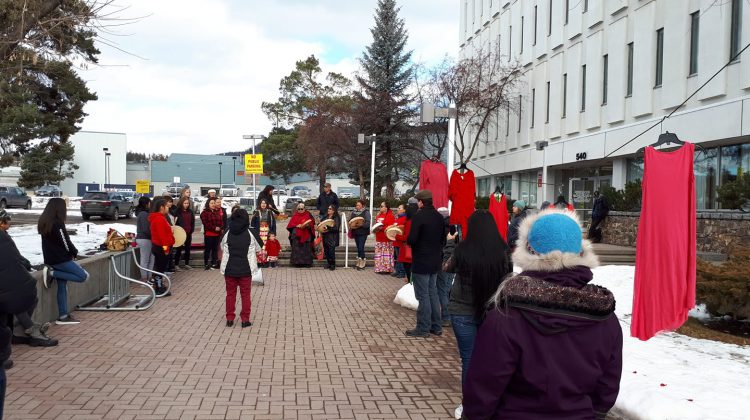 Drumming and singing was held outside of the Williams Lake Courthouse on Friday to honor missing and murdered Indigenous girls, women, and men.

“I feel that Williams Lake has often been overlooked in terms of the missing and murdered Indigenous women and girls especially with the National Inquiry because not many people know that Gloria Moody is the first person on the Highway of Tears list and Gloria Moody was found on Highway 20 just on a ranching road,” Harry said. “She was found brutally murdered and that’s the first name on the Highway of Tears of list, and Williams Lake I don’t think has had much support or had a space to talk about this or to honor the families in different ceremony so I wanted to bring that to Williams Lake because we have a lot of missing and murdered Indigenous women, girls, and men from our communities.” 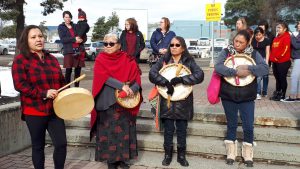 With the support of the women in her community to launch the initiative, Harry added they are always looking for more support and more allies.

“We have plans to actually have more events during Stampede weekend because Stampede weekend is one of the most times that Aboriginal people in this town have faced violence at the hands of RCMP and the colonial society,” she said. “Although Stampede is a time of year that everyone looks forward to it has often been times that women have faced the most violence in this community so we decided that that was the right time for Williams Lake because a lot of eyes are on Williams Lake during the stampede and it’s a lot warmer for Elders to come out.”

“This is one of my passions and what I would like to do is to add my name to your list,” Dyck said. “The first thing I saw this morning when I opened my email was Maggie Ranger’s email and I thought we got to get dressed and go. This is where I should be.”

Having attended a memorial in Toosey, Dyck said that she was very impressed and touched by the number of people that were there.

“I think we need to do this more often,” she said. “We need to shine the light on all of those wonderful mothers and grandmothers that have passed on through violence. We buried a young lady a couple of weeks ago who had suffered violence. She was hit by a car but her history was a lot of violence and there was a reason why she was out there. Sometimes the rapes, assaults and the beatings, the woman doesn’t die then but her way of life becomes a way in which she will end up dead because of drinking and drugs.”

Mary Tenale said she was honored to be in attendance and that she was representing her niece Sabrina Rosette who was murdered at the Tl’esqox (Toosey) First Nation last June.

“We still haven’t found who has done this to her,” she said holding back tears. “All I want is justice for my family, for her family, for her mom and her dad and her children that she left behind.”

Dyck who had started working at the Canadian Mental Health Association’s violence against women and relationships program in the ’90s said she hopes in the near future to do something around the Red Dress ceremony in her own community.