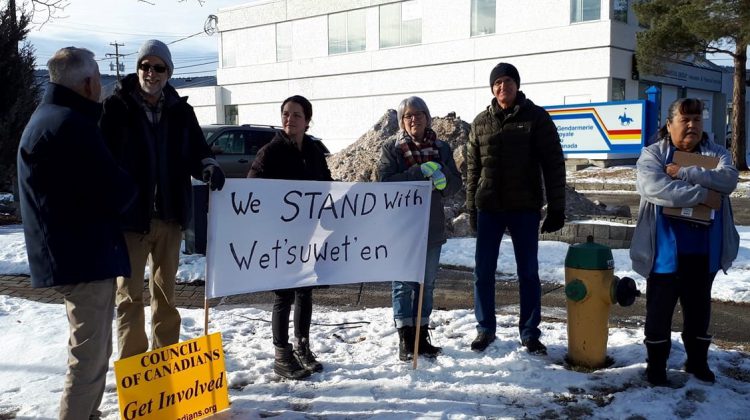 A small group of protesters gathered outside of the Williams Lake RCMP detachment Wednesday morning to show solidarity with Wet’suwet’en hereditary chiefs.

“No one specifically organized it. Some of us were talking about it the other day and just scrambled to put something together today,” said Williams Lake resident Erin Hitchcock noting that another protest is planned for Thursday at noon.

“I want to raise awareness about what is going on with the Wet’suwet’en Nation and also to support them as well, and because what’s happening to them and the lands which we are all a part of, it’s just not right. It’s degrading to the people there and it degrades us as well as human beings.”

Hitchcock said she would like to see the pipeline stopped and for the Canadian government to recognize the Wet’suwet’en hereditary chiefs’ rights.

She said while she understands the RCMP who has been directed to remove protestors breaching the injunction order are doing their job, it should not be happening.

“As colonization is still happening, it’s trampling on First Nations rights, degrading them further and we should be working together as a society to look after each other,” Hitchcock said. “If you look back to residential schools it’s the same thing that’s still continuing.”

Joining Hitchcock in the protest was local resident Roger Hamilton who said he is opposed to the liquefied fracking project.

“Starting that project at this time is just reckless, irresponsible,” he said. “The Wet’suwet’en hereditary chiefs are opposed to it so I’m supporting them.”

Hamilton added his concern is related to climate change.

“I think it’s a real threat to our society and we have to start stopping the burning of fossil fuels,” he said. “Subsidizing the kickoff of a new liquefied natural gas industry when we have 10 years left to start drastically limiting emissions it’s reckless. The amortization period for this pipeline and LNG plant is 40 years. That takes us to 2060 and we have to put off fossil fuels by 2050. It just doesn’t add up.”

Hamilton said he would like to see the protestors who were arrested released, discussions with the Wet’suwet’en hereditary chiefs, and the pipeline project shutdown.

“Fracking is not a clean energy and there are concerns about what could happen if there was an incident in poisoning the water which Wet’suwet’en people rely on as well,” Hitchcock said. “We need to be creating more biodiversity not destroying it.”