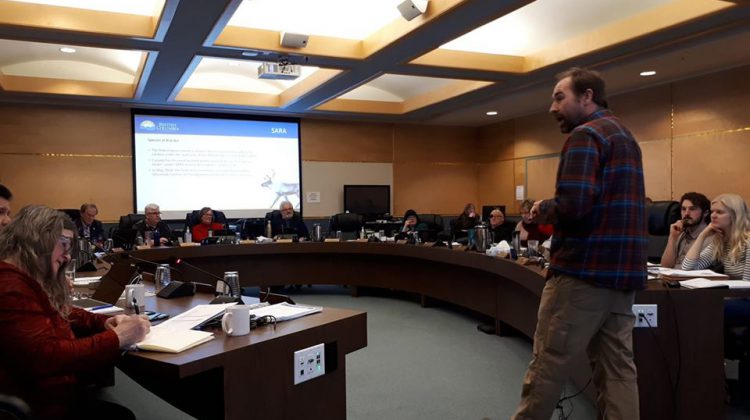 Meeting with the Cariboo Regional District Board on Thursday was the Ministry of Forests, Lands, Natural Resource Operations, and Rural Development’s Caribou Recovery Team.

“I just wanted to clarify before we started the session which was slated for six hours, it took a little over five, that it wasn’t going to be the only engagement that we received because they are required now to engage with local government,” Area H Director and CRD Chair, Margo Wagner told MyCaribooNow.

“This was kind of a preliminary meeting and it was extremely informative. It was to do with the Southern mountain caribou but maybe on the western edge, and we had some really good discussion about some of the plans they have and what some of the ideas where they are looking for feedback.”

Land Resource Specialist, Sean Mitchell confirmed at the meeting that the province is in its second year of a $47 million five-year recovery program for the Southern mountain caribou. He admitted the previous community engagement session was unfortunate in how it rolled out.

“The intent is to have sessions like today meeting individually and listening to British Columbians and then building a plan together,” Mitchell told the Board. “The federal government put so much pressure on those herds that it was backward. We built a plan, we built an agreement, we rolled it out, and it blew up in our face as you guys know. So it’s very different. We don’t have a plan, we want to make the plans together.”

“Caribou can be seen as an indicator of the health of our forests and right now, and especially in this area due to many factors, we don’t have a healthy ecosystem there,” he added.

The timeline for the herd planning process for Southern mountain caribou is June 2020 to December 2020.

Mitchell said the engagement process will begin with small table sessions in which the program and the tools for recovery are discussed, and the science for each herd’s own interests is presented.

“At this stage, we’re just getting recommendations on what tools this group or individual communities support,” he said. “ Once we do sessions with local governments, indigenous community groups, industry, and stakeholders we’re going to consolidate all that and create one what we heard document.”

Incredible cost to the province

Mitchell said each group will have their own session.

“Our government is realizing the resource implications of doing these sessions,” he said. “As you can imagine I’m from Smithers and I’m doing these sessions all over. There are five of us on this team. It’s an incredible cost to the province literally to do this. In my mind, it’s the only way to do a project like this.”

Mitchell added that the stakeholder sessions may turn into one public meeting in Williams Lake or go online.

‘We commit to hit all stakeholders,” he said.“Our goal to bring everybody’s voice into caribou recovery. Whether it’s an in-person session or an online session or mailout session, we’ll see what that looks like but there’s the commitment to reach out and hear from everyone.”

Once the single what we heard document is developed, Mitchell said they will then move into an analysis phase and scenario development where three recovery scenarios for each herd are developed as well as socio-economic impact assessments for each scenario.

Those scenarios after receiving feedback from communities  will be then sent to a ‘large table’ session with one representative from each of the ‘small tables.’

“We’ll have a large table; most likely for the Chilcotin herds it will be a 40 to 80 person table. We’re going to present those recovery scenarios and through a facilitative process try to move that table closer to consensus,” Mitchell said. “So that’s the second input of the citizens of British Columbia. Their representatives are going to argue, are going to fight for what their values are and what recovery needs to look like from them. It’s going to be a huge challenge. Most likely it will be a couple of sessions.”

The large table has the ability to look at the three scenarios and decide which scenario they want or build a new scenario altogether.

“Once we have a recommendation it will go to a decision-maker, a provincial B.C. decision-maker,” Mitchell said.“Once we do have a decision we’ll move into an implementation phase. We’ll develop the plan and any protection will go into a land use planning process and all other actions will be dealt with immediately.”

In the Chilcotin, Mitchell said the Itcha-Ilgachuz caribou is a herd that cannot wait and that the primary cause of mortality is predation.

He said the Minister has approved a 2-year wolf reduction program in the Chilcotin that will begin within the upcoming weeks.

“The Itcha-Illgachuz has declined 40 percent in one year; 680 to 320 animals last year. That decline in 5 to 6 years, we will not have caribou,” Mitchell said. “While we want to engage like this, the Chilcotin Itcha-Illgachuz is a herd that cannot wait.”

Mitchell said a wildlife consultation proposal to indigenous communities, guide outfitters, and trappers proposing a wolf reduction in the Chilcotin herd area was conducted within a short period of time.

“We developed a decision note identifying, again making a really tough decision for our Minister, identifying where the support is, where the opposition is, what the science says and the Ministry agreed with the science and approved a 2-year wolf reduction program in the Chilcotin.”

Once a what we heard document is developed, Mitchell said they will move into the analysis phase and go through a an assessment.

“And then we will set up a technical working group with the Nations at the helm; Southern Dakelh Nation Alliance, Tsilhqot’in National Government, Ulkatcho and we put in the invite to the other nations that have overlap to be a part of this,” he added.

“It will be a technical working group focused on the science; not pulling all the politic stuff, not pulling in the values. It will be this group taking the results of early engagement, taking the science,  the local knowledge, and building the recovery scenarios together.”