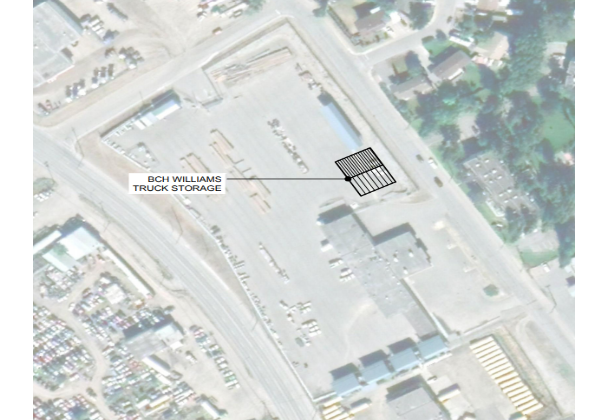 Williams Lake City Councillors deferred approval of the development of a 4 bay-truck storage garage at 835 Second Avenue North by BC Hydro after a resident expressed concerns.

Living on Dodwell Street since 1976, Tim Hurley Sr. told Council at Tuesday’s meeting that he has seen a thing or two that has impacted his neighborhood and does not want the same mistakes by having James Western Star to operate in such close proximity to a residential area.

“We’re talking about something that’s over 5,000 square feet and 27 feet high,” he said. “Is it similar to what exists at Western Star? If that’s the case James Western Star has three work bays facing Rose. Most of the time they are open. The noise that comes from those bays resonates throughout the neighborhood.”

As well as the noise, Hurley also expressed concerns by night being turned into day with numerous bright lights some of which he said are directed outwards towards residences.

Hurley added because the trees James Western Star had planted to control dust and mask the view of their work yard are ineffective, BC Hydro needs to plant trees such as fast-growing elms along the boulevard of Second Avenue.

The rear of the BC Hydro garage would face Second Avenue with the bays facing Mackenzie. Director of Development Services, Hasib Nadvi confirmed it will serve not only as storage but also repairs and will have no set hours of operation. He said the chain-link fence that will have some slats to make it opaque will be installed along the perimeter of Second Avenue.

By deferring approval, Council agreed to request BC Hydro to plant additional appropriate trees and to re-evaluate the placement of its lights.

“I agree that we request Hydro to put some additional trees whether along our boulevard or inside the fence and the right type of trees. I was on Council when we did plant those trees,” Councillor Scott Nelson said. “We thought they were the right trees but as Tim pointed out the trunks are 10 to 15 feet off the ground and the noise comes underneath. They’re the wrong trees, so we learn from some of the things that we think we’re doing right.”

Hurley also suggested that BC Hydro install a sound barrier such as a 12 to 14 footwall. Mayor Walt Cobb said, however, it would be the repeated target of graffiti.

“It’s always a delicate balance of trying to accommodate light industrial development which abutts up against a residential area,” Councillor Ryll said. “Your concerns are valid and sound, and I agree with my colleagues. I think that it is appropriate for us to be able to go back to Hydro and make requests in order to accommodate the residential neighborhood and where you are developing your shop there are some concerns, we’d like you to address them.”