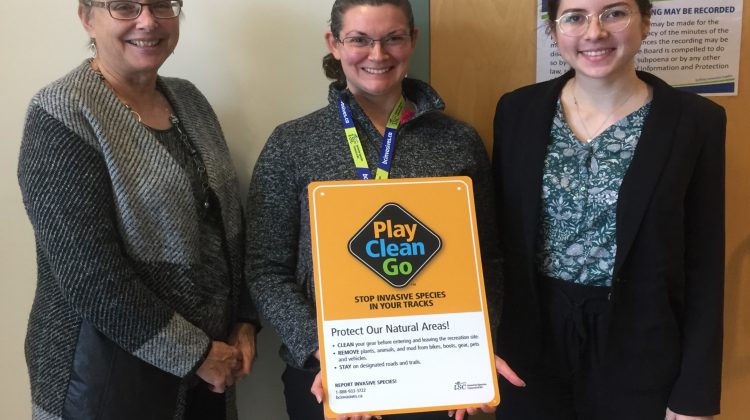 A sign campaign is hoping to raise awareness of protecting our natural areas from invasive species including plants and insects.

The Invasive Species Council of BC will be installing more of their ‘Play Clean Go’ signs on trails in the Williams Lake area.

Executive Director Gail Wallin says they have between 6 to 10 signs out now and are planning to put out 40 more.

“We can spread invasive plants so easily by our outdoor activities whether it’s on our boots, tents or whatever. So we’re really looking for people in the Cariboo to take action to protect our backyards, our lakes, our back trails, so you’re going to see Play Clean Go signs coming up,” Wallin says.

“There’s already some around the Williams Lake area so that people will clean their boots.”

Wallin says they have even provided a boot brush on-site so people will clean their boots before they move to a new area.

Among the invasive species the ‘Play Clean Go’campaign hopes to stop or prevent the spread of is burdocks, Canada thistle, tansy, spotted knapweed, and hawkweeds.

The Invasive Species Council is also working to promote their ‘Buy Local Burn Local’ firewood campaign to prevent the spread of the tussock moth that was recently discovered in the Wycotte Flat area south of Alkali Lake.

The BC Ministry of Forests, Lands, Natural Resource Operations and Rural Development said tussock moth caterpillars feed on the needles of Douglas fir trees, eventually stripping and killing them.

“We want people to keep their firewood local,” Wallin says.

“Let’s not bring it in from elsewhere, let’s not move the tussock month further north than the Cariboo and let’s not help it spread further north, so let’s keep firewood where you find it, use it locally, and that’s a real key for a lot of forest pests.”