Donations of warm outerwear including mittens, scarves, and toques as well as monetary donations were collected for the Cariboo Friendship Society before the start of a 5-kilometer run/walk Saturday morning in Williams Lake.

23 registrants of various ages took part in the Frosty 5km Walk/Run that started at the track at Lake City Secondary Secondary School campus. 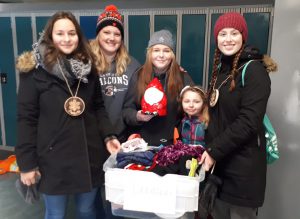 Leadership teacher Caitlin Sabatino says they had first decided to do the Frosty Walk/Run as a way of giving back to the community.

“We want to be visible within the community so that people can see all the great things that students do,” Sabatino says.

“The reason why we did the Frosty Walk/Run is there used to be a run in Quesnel called the Santa Shuffle with proceeds going to the Salvation Army but it has since ceased and we decided that collecting donations for the Cariboo Friendship Society to provide outerwear for people who are less fortunate right now especially heading into the winter season was a very good cause.”

Sabatino says they are fairly happy with the turnout and hope to make it an annual event.

“So we would like to make it an annual event, and then we did just have some of the running group ladies ask us if the school would maybe organize something in the spring as well maybe around Easter that we could do like an egg hunt along the way and stuff.”

The Frosty 5km Walk/Run wrapped up with participants receiving hot chocolate and gingersnaps. A cookie jar filled with cookies was also raffled.