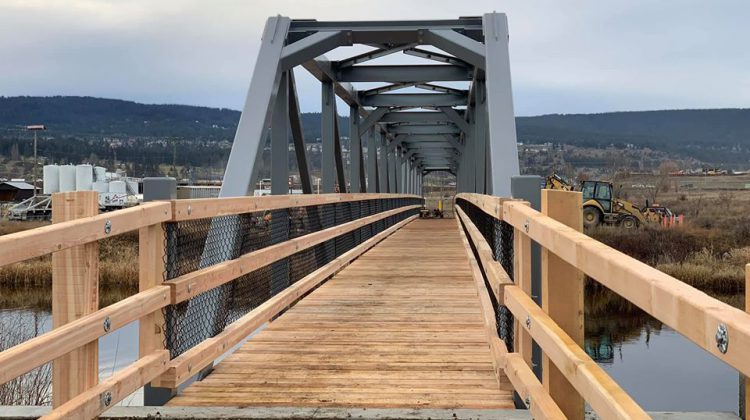 A pedestrian bridge connecting Scout Island and RC Cotton in Williams Lake is another step closer to opening to the public.

Marko Zurak with Quality Excavating says they did their final touchup and clean up Thursday.

He says they tried to make it a local project which they had successfully done.

“Beamac Installation built the bridge, brought it to the site and then we installed it,” Zurak says.

“And then Burkhart Construction, a local concrete carpenter type of guy that does general contracting work as well, we had him do all the wood handrails, walkway going across the bridge and the decking.”

Zurak adds that it was even local lumber that went into the project with the Toosey Indian Band having milled all of the wood.

The bridge still needs to receive its final inspection by the City of Williams Lake before it opens to the public. Minor work to the entrances have yet to be completed.

“They call it a heritage project and I suppose it will be there long after I’m gone,” Zurak says.

“I’m getting older but it will be there for my kids and grandkids. That’s a good project and I’m glad I got it. The second bidder was out of Vancouver, so I was quite happy that we managed to keep it local.”