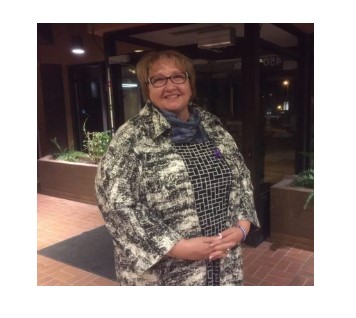 The Executive Director of the Williams Lake Women’s Contact Society will be supporting Williams Lake City Council in the initiative for perpetrators of domestic violence to have electronic monitoring.

That after Councillor Scott Nelson asked Irene Willsie if she would provide support following a delegation on the 2019 Purple Ribbon Campaign at Tuesday’s regular council meeting.

“I think that there’s a lot of energy that goes in from the service providers in the community into developing safety plans for victims. There are many different stages of a situation, but one of the most dangerous times is right after the breakup. Another really dangerous time is when someone is released from custody after serving a sentence.”

Willsie added there is a process in place with an interagency case assessment team known as ICAT to develop safety plans for victims at all stages.

“When someone is going to be released, that is a critical time, and a piece of paper that says you’re not allowed to come in so much distance of a victim I ‘ve had a several of time where someone said to me but a piece of paper doesn’t stop a bullet, and that’s how scared they are. So I would absolutely support that and the advocacy that you do to get judges to use that type of equipment.”

Willsie said not only is a victim vulnerable in their home but a victim is vulnerable at their workplace.

“We’ve all heard the news reports of domestic violence situations that have resulted in a held employee or managers of people who are the victims being injured or killed because if the offender can’t find them in their home, they know where they work,” Willsie said.

“Another location of high risk is where are the children being looked after while they’re at work. Are they at school because they know where the kids are going to school? and unfortunately at our daycare more than once we’ve had to circulate a picture of someone saying if you see this individual approach our facility call the police immediately. So a GPS tracking system for those addresses for workplace, school and daycare they can all be programmed into it as well.”

Councillor Scott Nelson said the last report the City had received from the Williams Lake RCMP indicated calls for domestic violence were up 41 percent.

“The victim is impacted after the crime as well because if they’re put on bail they never know when that person is coming back through that door or where they are,” he said.

Willsie said domestic violence and sexual assault are one of the most under-reported crimes.

“So we know that those numbers are just a small percentage of what’s really happening,” Willsie said.

“When there’s a domestic incident those are one the most dangerous calls that a police officer can go on because the situation is so volatile and the level of violence can be extreme, involve weapons and often times there are confusing messages given at the time of a police attendance because on one hand the offender and the victim are in a physical altercation, but they’re also in a relationship and they love each other, so things can get really out of hand out very quickly.”

Council agreed at Tuesday’s meeting to direct staff to have discussions with both Community Corrections and Crown Counsel locally to determine if there are any impediments to the implementation of electronic monitoring.