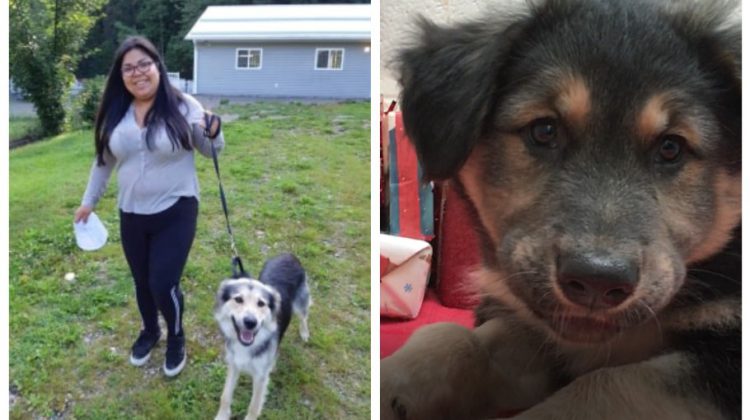 Updated: Being with family is perhaps one of the most important and rewarding aspects of the holidays, and for nine puppies and a dog found this past spring in a sealed box at the Puntzi Lake landfill that is where they will be.

The BC SPCA says after being treated for dehydration and malnutrition the puppies are all home with loving families and Casey has been united with her rightful guardian. 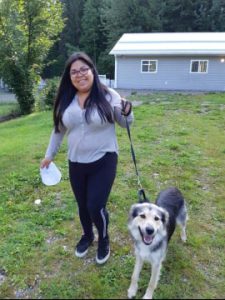 Rebecca was reunited with Meredith this past summer. -Image submitted

Rebecca Terry (Retasket) remembers the day at work when her phone went off with friends from Redstone sending her links of the story saying Casey looked like her Meredith.

“I was sitting out the back of my work crying because I was like I really hope this isn’t Meredith but if it is then I will fight to get her back because I tried numerous times before to go up and get her back,” Terry says.

“The SPCA needed evidence like pictures of me and her, so I got them and I sent them and I told them if you call her Meredith she will respond better than she will with Casey and sure enough she did.”

Before being found in a sealed box at the landfill by a good Samaritan, Meredith lived with Terry’s ex and family, who Terry says would not give her back.

“I think it was maybe a month and a half before she was found in that box that I was actually in Redstone trying to get her and I couldn’t find her anywhere, and he had known I was going up there to get her,” Terry recalled.

“I even drove around a bit and we couldn’t find her.”

Terry called the process of getting Meredith back a long one.

“It was really hard seeing all of the social media and everything saying that the owners should be punished which I agree, but once I had it on my page that it was Meredith and she was my dog a lot of people were saying that I was involved with it. It was really hard to read and I was getting super emotional over it,” she adds.

“Other people’s words can hurt a lot more than they think.”

Since being reunited, Terry says Meredith has gained some weight and is getting back to her ‘chunky little self.’

“It took her time to adjust and being back at my house. Obviously she is an inside and an outside dog, and when I’d go to work the next morning because I had taken August 3rd off to go and get her, she would follow me down the highway, she got out of the fence, so it was really hard for her to leave me,” Terry says.

“I had to keep her in the house while I was at work with my partner, and I think it was maybe three weeks we had to keep doing that until she was okay with me leaving and I would just sit there and talk with her saying I got to go to work and I’ll be back in eight hours.”

Terry adds although Meredith does not like collars making it difficult to take her for a decent walk, she has another four-legged friend who likes running in the open field with her behind Terry’s house and teaching her how to hunt mice.

(Editor’s Note: Rebecca’s last name has been updated after being incorrectly reported as Perry)