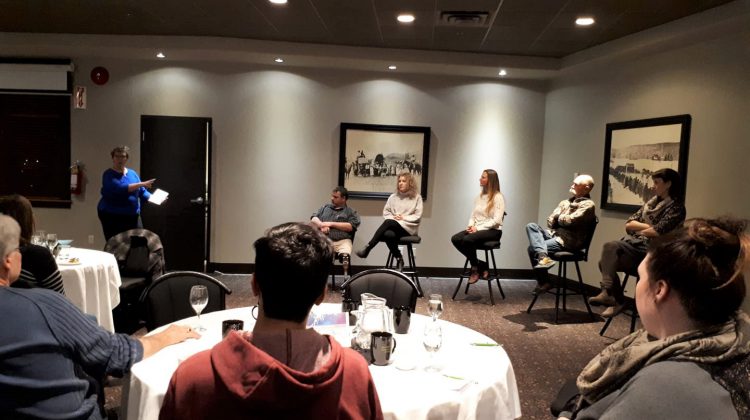 A quote by Henry Ford was how Mo Douglas ended her presentation ‘Change Happens’ that celebrated resilience and community Thursday evening in Williams Lake at Signal Point.

Douglas who had worked as the Director of Community Relations and Communications for the Vancouver Organizing Committee for the 2010 Olympic and Paralympic Winter Games says as much as she was here helping people talk about some of the most difficult times they’ve been through, she was blown away at the positivity.

“The best you can ask for in terms of outcomes from crisis is that we’re stronger, we’re kinder, we’re more united and we do feel more prepared for whatever our future holds-challenges or opportunities, and that I’ve seen in these communities and it’s inspiring to know that that’s who we are,” Douglas said.

“Canadians are generally resilient people but there’s this spark in everybody’s heart and soul here. I just love the strength that you feel from the people, and the other thing that’s happened in the room both nights is the connections that get made. Some folks who don’t even know each other, they bond a bit through the conversation and then come over and shake hands and exchange cards and make a connection, so coming out of the wildfire challenges might have been the reason for this but there are other great reasons to come together to have these people find each other in other ways to just build more positive opportunities for this community, so it’s been great to be here.”

The event concluded with Douglas facilitating a panel of five local businesses to share their stories of challenge, strength, and success within our region.

“Fire takes on a very different meaning for me,” said Brice O’Neill of New World Coffee and Tea House.

“In September we lost our business to fire and there were six businesses total. It’s one of the oldest blocks in Williams Lake-one the buildings will be 100 years old next year, so it’s going to change the landscape of Williams Lake. Having a small business we employed nine people and they were all like what do we do. I said go get a job, there’s a lot of jobs out there but the reason why I don’t want a job is I want to work for you. I said go get a job, and then you get assaulted in the grocery store-what are you doing, how can I help you and it really reaffirms that feeling of the wildfires.”

Following the 2017 wildfires, O’Neill said six of their nine employees had returned to Williams Lake.

“I know during the fires two different restaurants couldn’t open so I went to help them and then when we came back they helped me,” said O’Neill said.

“To have someone to come from a different restaurant to your restaurant and help you, and then you try to pay them and it’s like I’m not taking this money it says a lot about how great a small town is and how powerful the friendships can be. When you have a group of people and a powerful friendship helping each other it spreads around. I just keep telling myself it’s not if you fall, it’s get up and that attitude spreads to other people.”

General manager of Community Futures, Karen Eden says the event was made possible through their remaining funding available from wildfire projects.

Douglas was in Quesnel the previous night.

“Change is always going to happen. As we talked about it tonight sometimes it’s great and exciting and sometimes it’s overwhelming and you’re not sure how you’re going to come back from a difficult change but every time you do resilience is a muscle and it gets stronger and stronger every time, and it makes people braver in business, it makes people braver in their own life,” Douglas says.

“We heard from people tonight who accelerated good business decisions because the situation of the fire pushed them to, so there can be a lot of different outcomes and it’s great to see so many people who saw it as we’ve gone through it now this can be a path to better things, and they’re harnessing all the good things that came from it-a more united community, better connections, stronger relationships, knowing fundamentally because you know saw it happen for real how much other people in the community have your back whether they know you or not. That’s the kind of place people want to live, and I think Quesnel, Williams Lake, this whole region have so much to be proud of.”