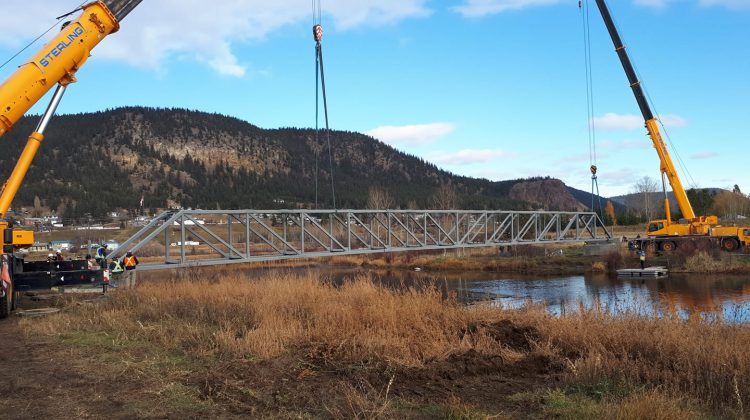 There is now a direct physical link between the RC Cotton site and Scout Island.

Wiliams Lake City Councillors gathered at the RC Cotton site to witness the raising of a pedestrian bridge that connects the site to Scout Island.

“We’re near the final stages here, so there’s a lot of work to do yet but now we’ve got the crossing almost in place and it’s looking great,” Cobb said. “It’s going to be a great addition to our community.”

Gathered at the opposite side at Scout Island to witness the raising of the bridge span was Ray Hornby with the Williams Lake Field Naturalists.

“We had some concerns to begin with but the City addressed them for us, and we’re still looking to see some other things addressed but we’ll see how things unfold,” Hornby said.

“It will be interesting to see how the City develops the rest of the trail down to the full trail system down below. It may be a little way off in the distance but I think it’s going to add a lot to the community eventually.”

The bridge now needs the installation of planking and railing as well as wheelchair access before it is ready to be fully utilized by members of the public.

“I don’t know whether they’re going to get that all done this winter or not-it’s going to depend a lot on the weather,” Cobb said. “But just talking to the contractor they will have the planking in place and the railings all along, so you’ll be able to crawl up and walk on it but it won’t be wheelchair accessible yet.”

The RC Cotton Site was acquired by the City from BC Rails in September 2018.

Cobb said trail development within the area will be ongoing.

“Once we get this connected here then we’ve got from the bridge all the way down to the Station House Gallery before we meet the other trails, so there’s a fair amount of trail work that has to be done besides this before we’ve got it all the way to the Fraser River,” Cobb said.

“It’s always one step at a time. What took us the longest here was securing the land so that we could put the trail along the river valley, and that took a lot of time and a lot of negotiations.”