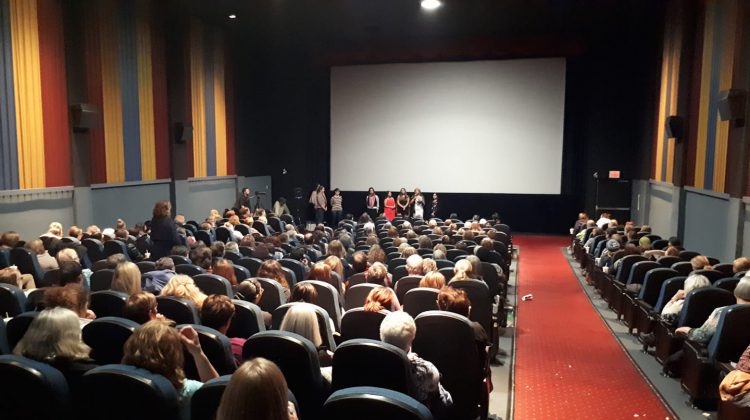 A long lineup and fifteen-minute wait did not deter moviegoers from standing outside of Paradise Cinemas in Williams Lake.

Despite it being initially unclear if all filmgoers would be able to purchase a ticket for Sunday’s 4 pm premiere, Paradise Cinemas opened a second theatre to show Because We Are Girls that was filmed in Williams Lake and Surrey.

“It couldn’t be better, and the fact that there was a diverse audience. So many men; we usually get mostly women at screenings, so that was incredible,” said film director Baljit Sangra.

“Just a lot of love and support, and all the organizations behind the scenes; the Transition Houses that made this happen and used all of their networks. I’ve never seen anything like this, this kind of momentum. It really was a homecoming for sure.”

The three Pooni sisters who are the subjects of the film offered a question and answer session following the screening in theatre one.

Jeeti said she hoped moviegoers were able to take home the message that it is not just a Pooni sister story but a story that touches every home in some shape or form, and that it starts the dialogue within their families about sexual abuse.

“The other thing is what can we do from here,” she said. “Yes, sexual abuse it’s on this big screen in this big way in this documentary; where do we go from here as a community, as a family to heal ourselves and to heal our cultures.”

Despite having been found guilty in April 2018 in Williams Lake Supreme Court, an application asking for a stay of proceedings was granted after the sisters’ rapist alleged his rights to a timely trial were breached.

“We suffered in every way but yes it’s worth it because look at the difference it’s making, look at the precedent it’s setting and look at the courage that we’re able to give others and be that voice for those that don’t have a voice just by sticking by this journey,” Jeeti said.

“I feel if one person heals, then whole towns start to heal,” Salakshana added. “The energy just goes.”

Kira said for her the journey is to set the next platform for the next generation.

“We’ve already been through what we’ve been through, so whatever we can do to make sure that they live in a safe and secure environment, to give them the tools that they need to make sure they know what is happening to them and to be able to stop it and when they go tell somebody that they’re believed,” Kira said.

“That’s my biggest message and platform that I want to set at, and I want to give the baton to that next generation so they have the confidence and the ability and the network around them to be able to do that.”

At least six counselors from various agencies in Williams Lake wore blue scarves at the premiere to be easily identifiable for anyone who needed support.

“The film is such a heavy topic that it could be triggering for some, and it’s a very hard topic to hear and it could be upsetting so we make sure that those supports are here and are available if somebody needs it,” said social programs supervisor for Cariboo Friendship Society, Tamara Garreau.

“It just sort of gives an example of the supports that Williams Lake does have because it was amazing how many blue scarves that were around that could be there to help somebody. I was actually shocked at the number and that wasn’t even everybody, there was more. I don’t even know if they had enough scarves.”

“It covers this whole wrap-around service, and we have so many committees in Williams Lake,” Garreau added.

“We have the Violence is Preventable Committee and we have the ICAT committee, and now this new Situation Table that came and these will all cover anything that anybody is having any problems with, and if there’s domestic violence or if there’s violence against women then these services are here for them.”

An estimated $3,700 was raised for the Chiwid Transition House by the proceeds of the film.