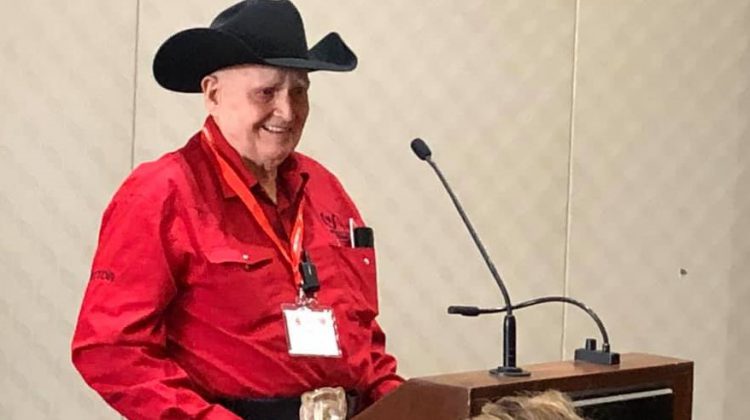 A volunteer and director with the Williams Lake Stampede since the early 1960s has been named the Canadian Professional Rodeo Association’s Committee Person of the Year.

Willie Crosina was presented with the award during the CPRA’s committee convention in Red Deer, Alberta on Thursday.

“Every year from Canada we elect a Committee Person of the Year, and how that goes about the rodeo committees can nominate any person from the rodeo committee that they think is worthy of this, and then we have a panel and we sit down and we shortlist it and then select a winner,” said Lloyd Gray, committee representative on the CPRA Board of Directors.

“This person has had to put a lot of time and effort into working on their rodeo, promoting rodeo, and many different aspects. They’ve got to be a person that’s really dedicated their life to their community and to the rodeo committee and to promote the sport. Willie is only 95 years young and he certainly has done that.”

Crosina has led a bus tour from Williams Lake to the Canadian Finals for the past 43 years.

Gray said he has personally known Crosina for 40 years and that when he first started going to the finals himself Crosina was always one of the first guys you would meet.

“We did some calculating and he’s probably sold about 13,000 seats over those years by doing this,” Gray said.

“That’s just one thing he has done, plus all of the work he’s done in Williams Lake. There were some other good people nominated this year but he was definitely our first choice, not because of his age but what he’s done over the course of his rodeo volunteership I guess I could put it that way.”

The Williams Lake Stampede Association wrote on Facebook that they could not think of a better person to win the award.