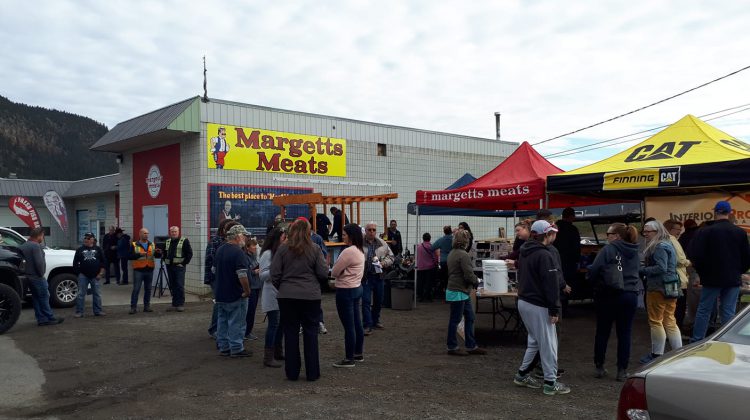 Williams Lake residents showed their support over the lunch hour Friday for loggers impacted by the downturn within the province’s forestry.

Helping organize a by-donation barbeque outside of Margetts Meats was Leslea Destree who said it was a busy afternoon.

“Super supportive right off the bat,” Destree said before 12:30 pm.

“MLA Donna Barnett called me this morning and donated $500 before we even got started, so from there it has just been a lot. We’ve had to empty our donation bin a few times already.” 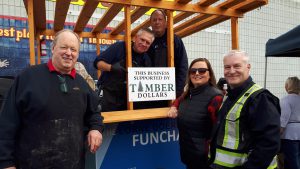 Destree said her husband works for Finning and has been affected as well as many other families.

She said it was last weekend when they were having a game of cards and having seen the logging truck convoy in Vancouver that they decided they had wanted to do their part.

“My uncles generously from Margetts Meats donated the meat for us and then I just had many other businesses just come and decide that they had wanted to help too,” Destree said thanking Margetts Meats, Finning, Lorne Doerksen, Still North Design Co., Interior Properties, and Old Dutch.

“So that’s sort of where it all began and we decided well let’s do it.”

Among those stopping by to make a donation and grab a bite was Mayor of Williams Lake Walt Cobb.

“I think it was a great idea,” Cobb said.

“What better way to support our workers and our loggers. Just to be here and just to talk to everybody, it’s perfect.”

Funds raised from Friday’s barbecue will be dispersed amongst the community’s logging companies where it will be used to support the families of the men and women within their crews.

“We’re going to hopefully keep the money with gift cards to grocery stores, and then those families hopefully can use to it for Thanksgiving or Christmas coming or whatever,” Destree said.