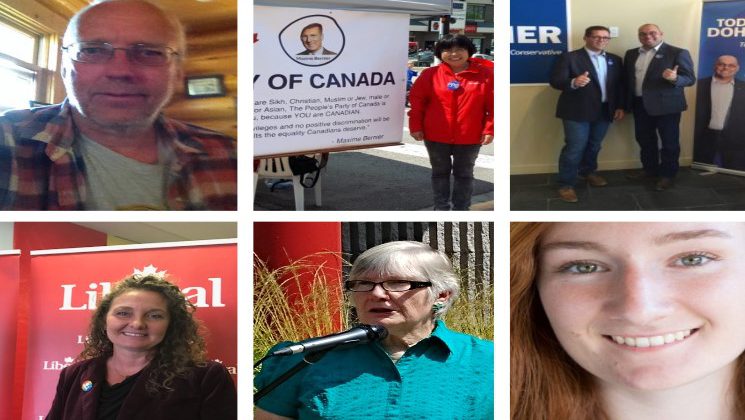 (supplied by Facebook, MyCaribooNow.com, MyPGNow.com, and Green Party of Canada)

A meet and greet with the federal election candidates for Cariboo-Prince George is planned to take place Wednesday, Oct. 16 at the Tourism Discovery Centre in Williams Lake.

“Basicially it’s going to be a mill around, visit around, and ask questions. They’re all going to be here at your disposal to speak with,” said Mark Doratti, executive director of the Williams Lake and District Chamber of Commerce.

“They will each be given a five-minute speaking engagement with a microphone to address whoever is here and everyone is welcome.”

The evening will begin at 5 pm and wrap-up at 8 pm.

As well as the meet and greet Doratti said they will also be conducting video interviews with each of the candidates.

“We have them scheduled,” Doratti said.

“They’ll be occurring this week, so people can likely expect to see candidates walking the streets of Williams Lake this week as I’m sure they’ll want to put two and two together that they’re going to be here they might as well be spending some time in with their constituents,” Doratti said.

The videos will then be processed and uploaded to the Chamber’s social media page by early next week.