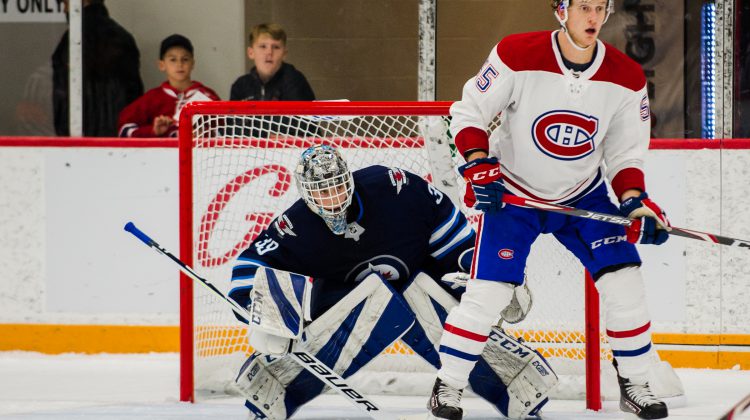 A former Cariboo Cougar is looking to make his mark with the American Hockey League’s Manitoba Moose.

Griffen Outhouse signed a one-year contract with the minor-league affiliate of the NHL’s Winnipeg Jets on Monday.

The 21-year-old explains how the deal got done.

“I was waiting in the summer to get a call from someone and I don’t know a lot of the inside stuff that goes on, so I just got a call from my agent with an invite to Winnipeg’s rookie camp. I went to Belleville (Ontario) and I ended up getting a contract offer after that.”

“I’m just happy to be playing pro hockey as I’ve wanted to do that for a long time, it’s been a goal of mine for a long time and I am just excited to get started.”

As for the pre-season tournament in Belleville, Outhouse maintained a laser focus so he could put his best foot forward.

“There was a lot of preparation leading up to that and I was happy with how I played personally, the guys were really good in front of me and that helped me out a lot with my confidence and my expectations were just to go into the camp and play to the best of my ability.”

Outhouse comes to the Moose after posting some gaudy numbers in the Western Hockey League with the Victoria Royals.

Outhouse ranks first among Royals franchise leaders in games played by a goaltender and sits seventh in WHL history for most wins collected by a goalie.

He flew onto the radar of junior teams after a stellar year with the Major Midget Cougars recording a 2.04 GAA in the 2014-15 regular season and also came up with a heroic performance to help Cariboo claim the Mac’s Midget AAA Hockey Tournament in Calgary defeating the Regina Pat Canadians 2-1 in overtime.

Simply put, both stops along the way helped get him to the point he’s at now.

“Both of those teams were just platforms I was able to use to keep moving forward, in major midget as a second-year player, it was a lot of fun with Trevor Sprague as our head coach and winning the tournament was pretty big.”

If Outhouse cracks the Moose roster out of camp, he could be backing up a familiar face in Eric Comrie whom he played against while Comrie was a member of the Tri-City Americans.

“He was actually starting against the Royals the first WHL game I ever backed up when I was 16 so it’s pretty cool to watch him there and obviously he dominated the league and we’re actually in the same agency so I got to meet him and train with him over the summer, it was a lot of fun because he’s a great guy and a hard worker.”

Opening night for the Moose in their 2019-20 AHL season is October 4th against the San Antonio Rampage.