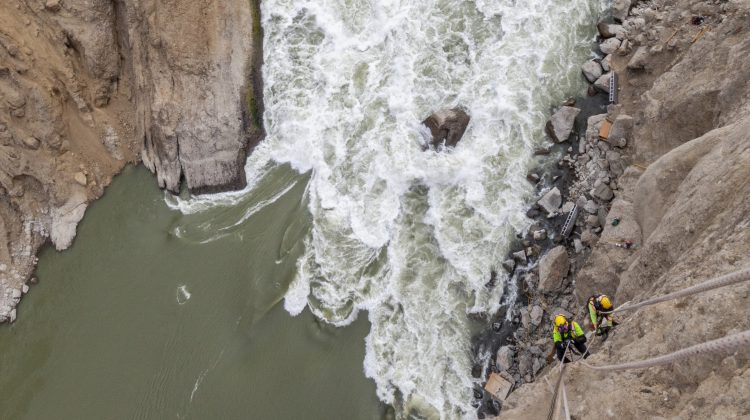 A Tsilhqot’in filmmaker is one of two local B.C. artists that the Big Bar Landslide Unified Command has collaborated with to capture the spirit and efforts of those who continue to dedicate their time to restore salmon passage.

Trevor Mack has edited together seven videos after working with the Unified Command for the past six days.

“It was difficult. It was fun,” Mack said.

“I got to go in the helicopter a few times, but one particular day I got to actually be the only person to get on the edge of the cliff where the rock scalers were scaling down 300 feet and I got to be harnessed up and I got to lean out in the cliff, holding my camera out as these awesome rock scalers are going down the cliff.”

Being able to record the scalers Mack said he also gave them a GoPro that resulted in the capture of some incredible footage.

“Being in the whole middle of everything where the action is was exhilarating and it was fun, but it was hectic as I had to culminate hundreds of hours of footage that they had already shot into seven distinct videos with their own stories.”

Mack who returned from the area on Sunday said he hopes to return in the next month or so to create a larger, almost full-length documentary.

He said one of the reasons he wanted to do the project was because not only does his community of Tl’etinqox value and respect the salmon, the salmon is a valuable food source.

“I wanted to get right in the middle to see how all of this is happening and to see the salmon’s tenacity and effort to try so hard to swim hundreds, sometimes a thousand plus kilometers to get back to their spawning ground and in that process feed not only humans but the bears, the wolves, the cranes, and the nitrogen from their bodies feeding the trees,” Mack added.

“The salmon is not only a crucial part of our Indigenous way of life but really the way of life of British Columbia. It’s a massive artery that brings life to British Columbia and hopefully these videos spread more awareness about that and change our relationships to the water and lands.”

Mack said the videos will be made publically available, and that he has already posted on Facebook a video of drone footage that shows the progress that was made from July 26 to September 13.

(Editor’s Note: Listen to Trevor Mack with the author of this report in the audio file below)