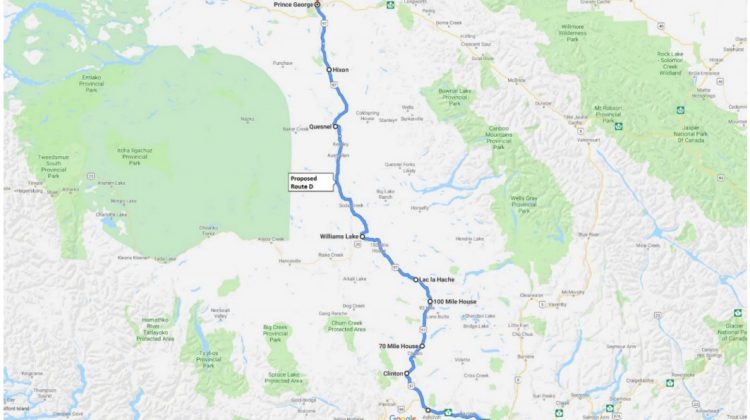 (supplied by Passenger Transportation Board)

A second bus route between Kamloops and Prince George will not be happening.

A request to establish the route by Alberta based Ebus that would have intermediate stops in Cache Creek, Clinton, 70 Mile House, 100 Mile House, Lac La Hache, Williams Lake, Quesnel, and Hixon has been denied by the Passenger Transportation Board.

In its decision, the Board said it found that EBus had not demonstrated that there is a public need to add the route and that the approval would promote sound economic conditions in the passenger transportation business in BC.

Already approved to operate a similar same route and providing it since May 2019 is Adventure Charters.

Owner Janna Gertzen said they were concerned about the proposal and had supplied a letter to the Passenger Transportation Board.

“I think that it was a good and fair decision by the Passenger Transportation Board,” Gertzen said.

“I think that they recognized that they need to give us time to get up and get established before they bring in competition. If Greyhound couldn’t be viable it would be extremely tough to have two companies operating in the same area.”

“Our focus is getting ridership built up where we can start adding runs and expanding the number of days that we operate between Prince George and the Lower Mainland, and Prince George to Kamloops to make it easier and better for everybody to get around as they need to,” she said.

“The biggest future goal is to start adding runs as the passenger count goes up.”

Despite being denied the Cariboo route, the Passenger Transportation Board did approve Ebus’s request to expand its route between Kamloops and Kelowna.

That route will extend to the communities of Chase, Sorrento, Salmon Arm, Enderby, and Armstrong starting Oct. 7.