A restored Spitfire attempting to fly around the world made a stop at the Williams Lake Regional Airport.

Visitors gathered to catch a glimpse as the 1943 British single-seat fighter aircraft named ‘G-Irty’ stopped to refuel Thursday afternoon and provide a flyover before departing to Fort St John.

“The two guys that own this airplane decided that they wanted to showcase a Spitfire to people that perhaps have not seen it before and that was the seed for what then became an ambition to fly around the world which has never been done before in a Spitfire; in fact, we have just broken the world record for a Spitfire,” pilot Ian Smith said.

“The longest journey up until that point had been by one pilot and he had flown 10,000 kilometers and we’ve done over 10,000 miles now, so already we’ve broken that record, but the idea is for everybody that hasn’t seen a Spitfire before to actually see one and of course for us to have a once in a lifetime opportunity to see the world from a great perspective, so it’s quite an adventure.”

Beginning the longest flight last month from the United Kingdom, a PC12 aircraft that has two other pilots, a chief engineer, and a cinematographer and a cameraman aboard is leading the journey.

The Spitfire that set out from Seattle on Thursday and made a stop in Kelowna before Williams Lake will spend the night in Fort St. John.

It will head into Alaska on Friday before crossing the Bering Strait into Russia within the next three to four days.

The aircraft had flown a total of 51 missions in World War II.

“She’s just come out of a major rebuild, so every rivet-85,000 of those have been replaced,” Smith said.

“She’s not flying her original engine, but 85 percent of it is original, so she’s probably unique in that regard because there aren’t many around that haven’t had skins replaced and also little sorts of other bits and pieces replaced, so she’s really special to us.” 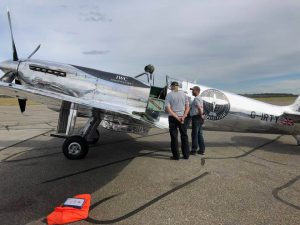 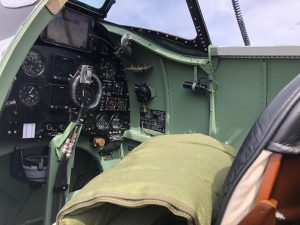 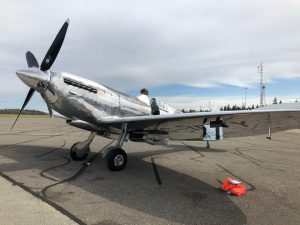 (Editor’s Note: This article has been updated to correct the spelling of the Spitfire’s name)