Quesnel residents to rally for a safer city

Quesnel and area residents are being invited to come together in solidarity to show that they are concerned about the increase in crimes happening in their city.

Debra McKelvie is part of the umbrella organization Quesnel in Action and is helping to facilitate the event on Tuesday at City Hall. 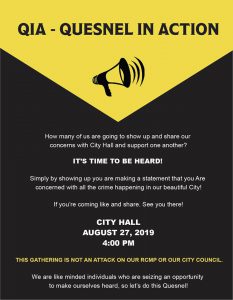 “I think our residents are living in fear from all the increased crime we’re seeing in Quesnel and I don’t think people should have to live like this,” said McKelvie said who has been a resident of Quesnel for the last 44 years.

“I had my business broken into and every morning I come in here and it’s always on your mind. You come in and you’re always thinking gee I wonder if somebody got in here, so I suppose it has affected me to a certain degree. The place where I live we had a vehicle two doors down where people were trying to steal it the other night so it’s all around us.”

McKelvie said she believes the RCMP and Council are frustrated like everybody else, and that the catch and release justice system is a problem.

“T think that their numbers are down as far as the RCMP complement is concerned so those are things that we need to lobby for.”

Tuesday’s rally gets underway at 4 pm.

McKelvie said they are hoping to have some guest speakers noting that MP Todd Doherty and MLA Coralee Oakes have been invited to attend.

She adds that they have been invited to further voice their concerns after Council wraps up their regular meeting.

“I don’t have a clue how many people are going to show up, but I think that when Quesnel gets together that positive things happen and that we are capable of solving these problems with some action,” McKelvie said.

As for after Tuesday’s rally Mckelvie said they intend to bury the government agencies with their concern by writing letters.

“We need to organize more rallies in the future, we need to encourage people to look out for each other in our neighborhoods, we need to organize boots on the ground who will help our council and elected officials and the regional district also because we’re affected all over Quesnel, and I think we’ve got an opportunity here on Tuesday to get involved in the process by attending the meeting and gathering to show our support for each other in the community.”

Calling Evelyn Towgood of Regency Chrysler a real community leader who has been gathering letters of support to deliver to various agencies, McKelvie said letters can be emailed to [email protected]

(Editor’s Note: This article has been updated after Towgood’s first name was incorrectly reported)