On the 30th anniversary of the Xeni Gwet’in First Nations Government enacting its first modern written law, the Tsilhqo’tin Nation is enforcing a new law that it says will better regulate hunting on its declared Title Lands and help ensure wildlife populations are conserved and protected for generations to come. 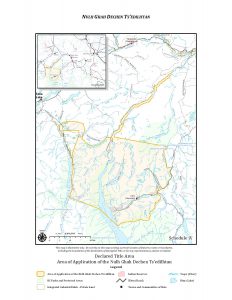 The Tŝilhqot’in Nation has enacted the Nulh Ghah Dechen Ts’edilhtan (“Wildlife Law”) that regulates hunting by Tŝilhqot’in and non-Tŝilhqot’in persons after it was endorsed by the Tsilhqot’in Council of Chiefs on July 25.

“This is a ground-breaking accomplishment for the Nation as we work collectively to see our jurisdiction recognized throughout our territory,” Tribal Chair of the Tsilhqot’in National Government, Chief Joe Alphonse said in a news release.

“This law honours Tŝilhqot’in culture and recognizes our inherent law-law that our people have known and lived by for centuries. This law has taken a lot of time and effort; our people have been involved and consulted with throughout its creation.“

Commending the Xeni Gwet’in for taking the lead, Alphonse added they look forward to developing more laws that will help move their Nation forward.

The Wildlife Law that calls for respect for habitat states a non-Tŝilhqot’in person is not allowed to hunt wildlife in the Declared Title Area unless they have a valid permit issued that is carried with them at all times or is accompanied by a non-Tsilhqot’in guide outfitter who complied with Part 6 of the law.

It also enforces a ban on moose hunting with the exception of a Tsilhqot’in person who may hunt bull moose from August 16 to January 31.