Additional fish wheel to be added at Big Bar landslide

A second fish wheel will be added as a road to allow for the additional transportation of salmon by truck is expected to be ready by the end of the week. 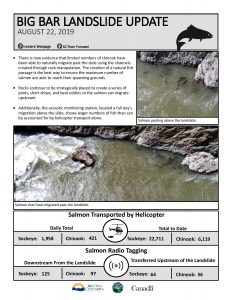 “125 sockeye and 115 chinook have been tagged and are in the pool of fish attempting to pass the slide. There’s preliminary evidence of natural passage of some chinook salmon migrating through the area and since last week 80 tags have been applied and we are targetting 20 more for today.”

Silverstein said as these data are processed, analyzed, and verified more information can be shared.

“We are developing an additional sonar that will allow us to monitor fish passage closer to the top of the slide in addition to our existing unit which is already further upstream, and we’re regularly using a drone depending on the site conditions to do regular video of the rock manipulation and to support the daily review of our planning operation.”

In terms of innovation, Silverstein said there are many people with suggestions and ideas on their response.

He said while they are staying focused on their priority actions and strategies, they are also evaluating tracking and categorizing those ideas that come in.

“Last week there was an expert advisory panel including first nation representatives and important suggestions and questions were asked and incorporated into our ongoing efforts on the site,” Silverstein said.

” For example Grand Chief Edward suggested we add more Indigenous commercial crews and we have one of those on-site now and another on the way. We’ve tracked and received over 100 submissions and many have made relevant contributions to our diverse approach and we continue to revisit those suggestions on a weekly basis.”