Over 11,000 salmon transported by helicopter over Fraser River slide

Salmon that normally start arriving this week near the Xat’sull First Nation are not due to the Big Bar Landslide.

Economic Development and Employment Manager, Cheryl Chapman said they can see a huge impact in their community over the lack of fish. 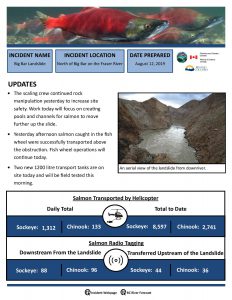 “My own household we usually only take 20 fish but for me not having any fish for the next winter will impact my health and my family’s health as well, and it’s also an opportunity for socializing in our community as we go down to the salmon fishing grounds together,” she said.

“Because we’ve elected to close our fishery to give the salmon the best chance possible, it will impact our community greatly.”

Chapman added that they also elected to close their fishery with the Mt Polley disaster as well as when there were previous slides at the Farwell Canyon area.

The Tsilhqot’in Nation declared a State of Local Emergency (SOLE) in response to the continuing crisis last week and said being caretakers of the Chinook and Sockeye that return to spawn in the Chilcotin watershed, they are gravely concerned with the conservation and protection of these precious resources.

The Big Bar Landslide integrated Incident Command said it will be holding a media briefing teleconference regarding developments in operations and around the salmon migration up the Fraser River towards the slide on Thursday.

Chapman confirmed they will not be doing the salmon sampling at tonight’s kickoff barbeque hosted by Gibraltar Mine and said while they will likely explain how dipnetting works they probably will not catch any salmon or even attempt to.

“Because Gibraltar discharges effluent into the Fraser River above the Xat’sull Heritage Village we have the salmon sampling barbeque where we teach our community members about catching the salmon and sampling them for their health and safety as our one of our food sources, and we’ve had this for quite a few years,” she said.

“It’s reassurance as well because we have the salmon sampling and then they give us the results of the scientific studies that are done on the salmon. That gives us the opportunity to let our community members know that they’re safe to eat because there’s ongoing fear with the discharge from the mine into the river. So they do the sampling a couple of times of year but this is the summertime one when we are actually able to get together with Taseko, Gibraltar, and our community members and do it together, and it helps to strengthen our relationship with them as well.”