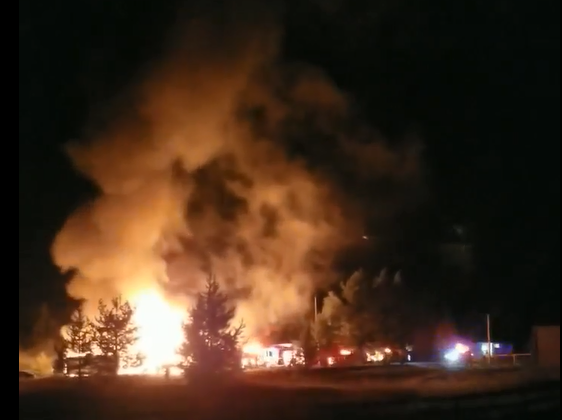 Update by R Dyok: A fundraiser continues for a 100 Mile House family who lost their home due to a fire.

Fire Chief Roger Hollander said the Department responded to the residential structure fire Sunday on Grey Crescent at around 2 am.

“Upon arrival, our crews observed the home that was fully involved in fire along with multiple vehicles in the driveway as well,” Hollander said.

“Quite, fortunately, all occupants which included two adults, two children, and three dogs did make it out of the house without injury.”

Hollander added crews were able to rescue two of the dogs that were trapped by fire and debris on top of the back porch. They were also able to prevent the fire from spreading to the neighboring property that suffered some damage to its siding.

“Our crews stayed on-site for approximately six hours and were assisted by mutual aid departments in the local area; Lone Butte VFD and 108 Mile VFD as well.”

The cause of the fire is believed to have started near one of the vehicles parked in the carport of the home.

“It was unknown in this particular case if the smoke alarms were working,” Hollander said.

“They did have alarms in the home, but we always like to remind the public to always have working smoke alarms in each level of the home including in the sleeping areas of the home.”

Witnesses say the family all escaped and no one was injured.

According to a fundraising page set up for the family, the home, as well as vehicles and trailers, were a complete loss.

No further details are available as yet. The fundraiser for the family can be found here.