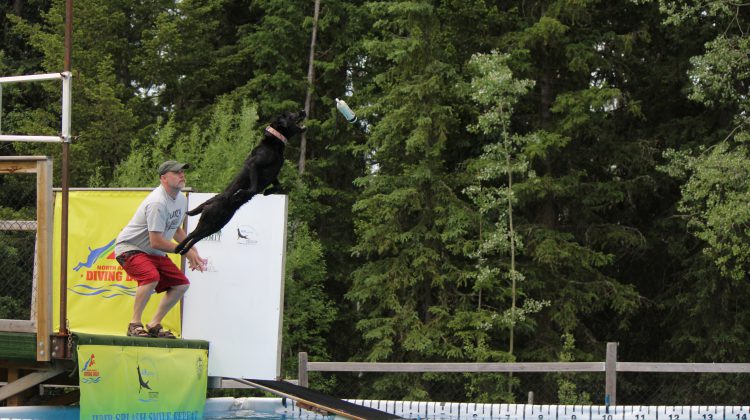 Erin Lynes with Eromit Labrador Retrievers & Aircademy said 50 dog and handler teams, with about half of them from the Cariboo, are entered in the 2nd Annual Western Cup Challenge that will take place on Schemenaur Road.

Lynes said all types of breeds will compete in four different events: Hydro Dash, focusing on speed, Fast Fetch, a strategic event, Air Retrieve, considered a competition of high skill, and the classic distance event which is the long jump.

“We have Whippets, mix-breed dogs, German Shepherds, numbers-wise definitely the Labrador Retrievers are the most prominent breed. As far as the dog who jumps the biggest and do the best that’s very individual, there are strong competitors in a variety of different breeds.”

The dog with the highest cumulative score over 4 events, Distance, Air Retrieve, Fast Fetch and Hydro Dash from within their own division will be crowned the Champion.

Lynes explained how some of that scoring is done.

“The main event for the Western Cup Challenge is the distance event. The dogs are scored based on how long their jump is into the water from where the base of the tail enters into the water, so they get points for beating dogs of similar ability in that event.”

This is also a fundraiser for the Smiling Blue Skies Canine Cancer Fund and more than 19-hundred dollars was raised last year.

The competition in Quesnel gets underway this (Friday) afternoon at one and will continue on Saturday and Sunday.

Spectators are welcome but they are asked to bring a lawn chair and to please leave non-competing dogs at home.